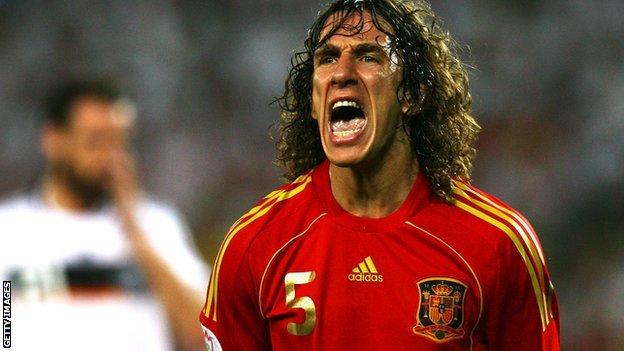 Barcelona's Spanish international defender Carles Puyol thinks it will be "impossible" for him to play in Euro 2012 after sustaining a knee injury.

The 34-year-old was sidelined for three months earlier this year with knee trouble and Barca confirmed he was now expected to be out for six weeks.

"It's going to be very tough, but I have to wait and see how the operation goes," Puyol said on Wednesday.

Asked at a news conference whether he thought he would regain fitness in time for the tournament, Puyol said: "I think it's impossible because when you come out of an operation there is a recovery period and I believe that those who are in better shape should go.

"I am not saying I am retiring or not retiring from the national team. I do know that I want to retire on the pitch and not on the operating table.

"Right now the operation is the important thing and later we'll see. It's not only my decision."

Vicente Del Bosque, who coaches reigning European and world champions Spain, will announce a provisional squad on 15 May, which will be whittled down to a final squad on 27 May.

He will miss Barca's final game of the La Liga season at Real Betis and Pep Guardiola's last game as coach, the Copa del Rey final on 25 May against Athletic Bilbao.

The powerful defender has been a reliable presence in the Spanish defence for more than a decade and has made 99 appearances for the national side, scoring the winning goal in Spain's 1-0 semi-final victory against Germany at the 2010 World Cup.

And former Spain and Middlesbrough midfielder Gaizka Mendieta believes Puyol could be missed more off the pitch than on it if he does not play in the tournament.

"It is definitely a blow," he told BBC Sport.

"Anyone missing is important, and especially someone like Puyol who is so experienced. He is such an important figure for the dressing room.

"Within the group, you can have Alvaro Arbeloa as a right-back and put Sergio Ramos at centre-back, and you have it sorted.

"There is no need for new players. Fortunately, Spain have so many options."