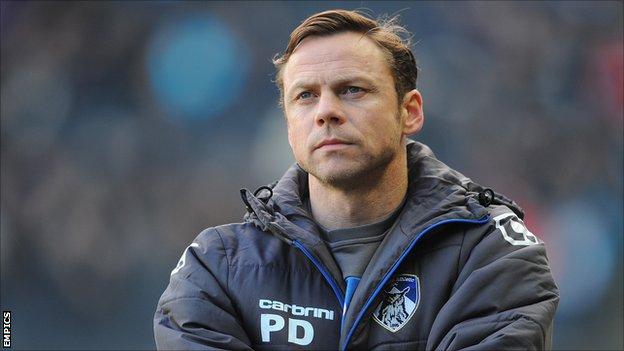 Striker Reuben Reid and defender Zander Diamond head the list of players who must now look for new clubs.

Meabnwhile, Dickov has informed nine more out-of contract players that he wants them to stay at Boundary Park.

"If I can keep the majority of the squad that was there against Carlisle, it does bode well for the future," he told BBC Radio Manchester.

"Everyone wants results straight away but, with a young squad, you're not always going to get it."

People come up to me and say I can relax now, but this will be my busiest time

Kieran Lee, Robbie Simpson, Chris Taylor and Filipe Morais are among the players who will be offered new deals later this week, but Dickov has said he will allow Taylor to leave if he receives a suitable offer from a Championship club.

The Latics battled against the drop during the second half of the campaign before eventually finishing 16th in League One, 11 points clear of the relegation zone.

"In a way, with the injuries we've had, it's been an achievement to stay up with the youngsters we've had, but we're looking for them to kick on now," added former Manchester City and Leicester striker Dickov.

"People come up to me and say I can relax now, but this will be my busiest time.

"I've got to reflect on where we went wrong on a lot of occasions this year and put that right, and I've also got to try and get players through the door."