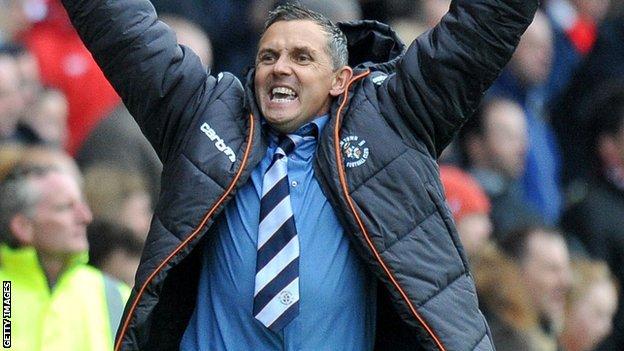 Manager Paul Buckle said he is "desperate" to lead Luton Town back into the Football League after guiding the Hatters to play-off semi-final success over Wrexham.

Luton will now meet York City, who beat Mansfield Town in the other semi-final, at Wembley on 20 May.

Buckle told BBC Three Counties Radio: "It'll be a proud moment to walk out at Wembley, but we are desperate to win.

"We've put a lot of pride back into the shirts, but there is more to do."

Buckle, who led Torquay to promotion from the Conference in 2009 and to last season's League Two play-off final, believes that experience will be helpful in preparing the Luton players for a final that looked beyond them after a run of six games without a win left them seventh in the table prior to his appointment in early April.

"I've been in this situation before, when having got through the semi-final there is a long wait until the final, but I'll start preparing now and come the final we'll be ready," he said.

"Against Wrexham, we had to show different qualities in the second leg to those we showed in the first, when we gave them a real beating. You can't expect your team to be brilliant for 90 minutes in every game, but we were good enough.

"The Wrexham fans really believed they were going to get the [aggregate] equaliser and it got a bit tense at the end, but we deserved to go through. It didn't sound like our fans were nervous because they sang the whole game, and I'm thrilled for all of them.

"Since I came to the club their support has been immense. I'm so glad we've repaid them, we've put a lot of pride back into the shirt and they've played a major role in that."