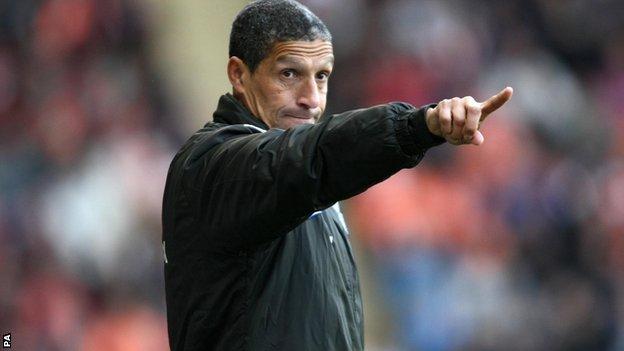 Birmingham City boss Chris Hughton says his side can turn round their Championship play-off semi-final deficit, if they play better than they did in Friday's first leg at Blackpool.

Blues go into Wednesday's return game at St Andrew's trailing 1-0, thanks to a Curtis Davies own goal.

But Hughton told BBC Sport: "If we're better than we were on Friday night, we'll have a chance.

"We have a deficit of only one goal and we've been strong at home all season."

Blues have had their play-off failures in the past at St Andrew's - notably the painful penalties defeat by Watford in 1999 and the following season's shock 4-0 home semi-final first-leg battering by Barnsley.

They then also dramatically went out on penalties at Deepdale in 2001 - Trevor Francis's third and final failure - before Steve Bruce took Blues up at his first attempt a year later, Stern John's late winner at Millwall earning a trip to the Millennnium Stadium, which ultimately ended in victory on penalties over Norwich.

But, even after just a season at the helm, Hughton knows the effect a packed St Andrew's can have on any opposition team.

It's never been about whatever's gone on outside the club. We just want to go out there and give 110% blood, sweat and tears

"We'll have a full house and it can be a fairly daunting place to come and play," he said.

"They're a very loyal and passionate crowd and they will get behind us and make it a very noisy St Andrew's.

The clash with Blackpool will be Blues' 62nd game of a campaign that has involved European football, well-documented cash-flow problems and an overhaul of the club's squad following relegation from the Premier League.

All that is under a new boss who has proved so impressive that he has been linked with the managerial vacancy at Midlands rivals West Brom.

But, despite spending the season under such tight constraints, Hughton's mixture of Bosman signings and emerging young talent were good enough to finish above Blackpool in fourth.

Blues have already played nine more matches than the Seasiders this season and they hope to make it one more by reaching Wembley.

But Hughton, who led Newcastle United back to the Premier League at the first time of asking just two years ago, knows that it could all come down to who gets the breaks.

"There will be chances on Wednesday night," he said. "And it's about the team that gets that bit of fortune.

"They were better than us in the first leg.

"We just didn't keep the ball well enough. We need to be safer with possession.

BLUES IN THE PLAY-OFFS

"But it can be a funny game. The goal that settled it was a shot going wide which took a wicked deflection. And we had the best chance from Marlon King right at the end."

Top scorer King, who enjoyed Championship play-off success with Watford in 2006, is bidding to become the first Blues striker to reach 20 goals in a season since Steve Claridge in 1995.

But, more importantly, the much-travelled striker, who scored home and away in both this season's league meetings with Blackpool this season, has the Premier League in his sights again. And he insists that the character in the Blues dressing room will see them home.

"It takes what we've got in the changing room," he said. "It's a great togetherness.

"My feeling is, being brutally honest, if we didn't have Europe and the other cup games I think we would have finished in an automatic promotion place.

"But, if we had dwelled on 'what could have been', I don't think we would have been able to have got to this stage of finishing fourth - strongly. We hadn't lost in nine games, five draws and four wins. That's very, very strong by anybody's record.

"It's never been about whatever's gone on outside the club. We just want to go out there and give 110% blood, sweat and tears.

"We'll look at the first game and know we were nowhere near where we should be. It was disappointing, but we had chances and we're going to get more chances.I hit the woodwork twice and on another night they could have gone in.

"But we've put it right on the training ground and I think the boys are hungry and raring to go. Wednesday night should be a different game."