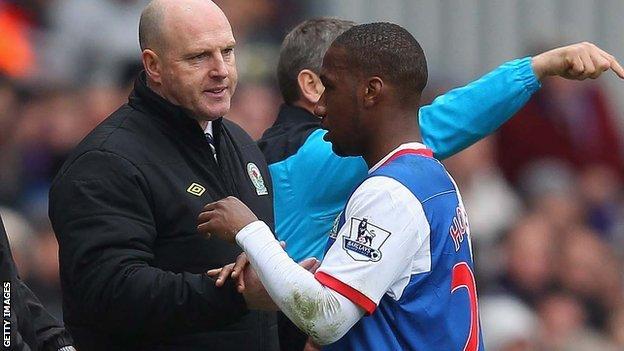 Blackburn could face an exodus of players after relegation from the Premier League, according to their former striker Kevin Gallacher.

Wigan's 1-0 win at Ewood Park on Monday sent Rovers into the Championship.

And Gallacher believes players such as striker Junior Hoilett will leave.

"Junior is not holding off signing a contract for no reason. He wants to see what the future holds and now we know the club's future is in the Championship," said Gallacher.

"No disrespect to Junior but I think he's gone and I am sure he will attract offers from the Premier League and also abroad because he is a real talent.

"You then worry that people like Paul Robinson may go as well. He has been a fantastic goalkeeper for Blackburn and you wonder whether another Premier League club will come in for someone of that experience and calibre.

"[Defender] Gael Givet has been a stalwart but the concern for Blackburn fans will be that these players will want to play at the highest level rather than drop down a division with Rovers. There may be others who feel the same."

During the defeat by Wigan there was sustained criticism from supporters of Indian owners Venky's and manager Steve Kean, while a chicken was released onto the pitch in an apparent protest against the club's owners, a company that specialises in meat processing.

Gallacher said Rovers have been in serious trouble for some time and believes the sale of key figures earlier this season proved costly.

"I'm afraid relegation has had a feeling of inevitability about it for a while," added the Scot, who was part of the Blackburn squad which won the Premier League title in 1995.

"They lost their better experienced players such as Ryan Nelsen and Chris Samba, good players and big influences in the dressing room.

"When you do that and don't replace them then you can end up in trouble and sadly for Blackburn it has ended up with relegation."