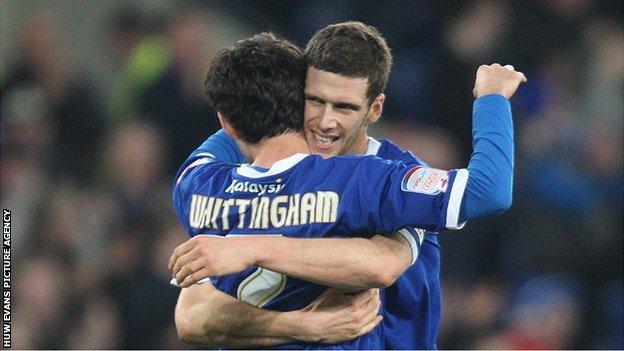 Mark Hudson has called on Cardiff City to keep hold of their best players for next season, including influential midfielder Peter Whittingham.

Whittingham was one of the driving forces as Cardiff reached the Carling Cup final and the play-off semi-finals.

His performances ensured that Whittingham was named in the PFA Championship team of the year.

"You want to keep your quality players and Pete over the season has been fantastic again," said captain Hudson.

"I couldn't rave about him enough, he always works hard and he never misses a game.

"If you look at how many games he's played this season he's always been there, trying his best, working as hard as he can for the cause.

"You do need to keep hold of those sort of players, but we'll see, we're trying to keep everyone together.

We want to keep putting ourselves in a position to succeed

"If we can do that and then maybe add one or two, we can go to the next level hopefully."

Cardiff's Malaysian owners are keen to put more money at manager Malky Mackay's disposal, which is likely to include the Bluebirds playing in red instead of their traditional blue to help attract sponsorship and support from Asia.

The proposed rebranding could see up to £100m of fresh investment in the south Wales club, some of which would almost certainly be made available to strengthen the squad and tie up existing players on new contracts.

"The gaffer has got a good squad together now and I'm sure he'll want to add one or two over the summer if that's possible," Hudson added.

"That gives him another year under his belt with the players that we've got.

"We're all going to have a good summer, get away, be with the family and make sure we're ready and raring to go when we come back.

"We want to keep putting ourselves in a position to succeed and that's what happens, sometimes it doesn't go for you.

"We're all here to learn and try to better ourselves and that's what we're going to keep doing, make sure we work hard for each other.

"We've got a great bunch, a great club and we're trying to go in the right direction. That's all we can ask for."