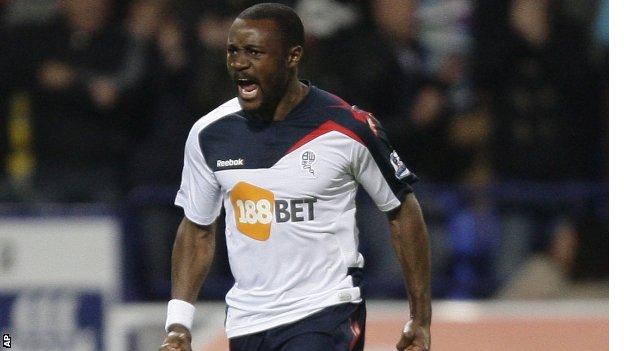 Nigel Reo-Coker is confident Bolton can emulate his former side West Ham's final-day escape from relegation.

The midfielder was part of the Hammers team that won at Manchester United in 2007 to stay in the Premier League.

"I've been in this situation before with West Ham. There's no fear in my heart. If anything I'm looking forward to the game more than ever," he told BBC Radio Manchester.

"This is football. This is what we dream about. This is why we play the game - it's big games and big occasions like this.

"We really have to stand up as men and be counted."

Owen Coyle's side, who are two points from safety, looked set to claim a vital win against West Brom on Sunday after taking a 2-0 lead, but they conceded twice in the final 15 minutes as the match ended 2-2.

Next week, Owen Coyle will be returning to the scene of his first game as a Premier League manager - his Burnley side lost 2-0 to Stoke at the Britannia Stadium in August 2009.

Wigan secured their survival with a 1-0 victory on Monday over Blackburn, who were relegated, leaving Bolton and QPR battling it out to avoid the drop on the final day of the season.

"The equation is there for us. We must win this weekend," said Reo-Coker.

"We've got to be positive and I can't see any reason why we can't go and win at Stoke at the Britannia and remain in the Premier League."

Bolton have taken four points from their last two away games with a draw against Sunderland and a win over Aston Villa.

Reo-Coker added: "We've performed really well away from home recently and I can't see why we can't continue the same performances away from home."