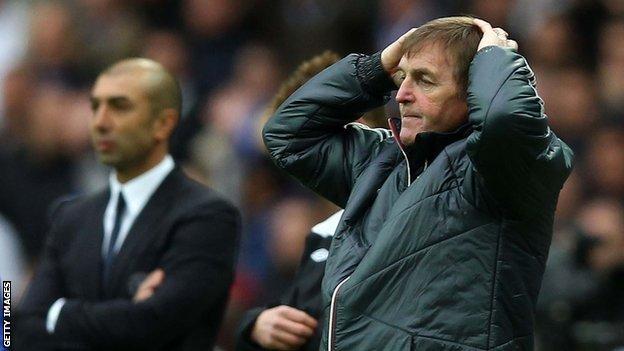 The Reds were beaten 2-1 by the west London side at Wembley on Saturday and the teams meet again on Tuesday.

"Everyone knows the home results haven't been great despite some excellent performances," said Dalglish.

"[A win] would be a little bit of solace for the punters who have given us tremendous support."

Dalglish led Liverpool to success in the Carling Cup in February but his side have struggled in the league, particularly at Anfield.

The Reds are ninth in the table with two games remaining, and have won only five of their 18 home Premier League matches this season.

"It would be fitting if we could finish off at home with a victory," Dalglish added.

"We want them [the supporters] to go home with a certain amount of satisfaction and we can do that by getting the three points.

"It would be fantastic for everyone to get a positive result - for both the players and the supporters."

Sixth-placed Chelsea have plenty to play for following results at the weekend, when Arsenal, Tottenham and Newcastle - the three teams directly above them - all failed to win.

The Blues can still finish third or fourth and take a Champions League qualification spot, though they will also secure their place in European football's premier club competition for 2012-13 if they beat Bayern Munich in this season's final on 19 May.

Juan Mata, who helped Chelsea beat Liverpool in the FA Cup final, is in confident mood.

"We have to win and still believe in playing in the Champions League next year," he said.