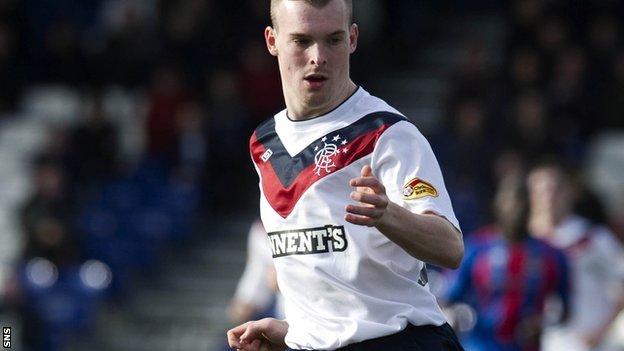 Gregg Wylde has been named in the Scotland Under-21 squad despite being forced into cold storage following Rangers' move into administration.

The winger agreed to leave the club, but his transfer to Bolton Wanderers was held up because of red tape.

His last competitive outing was against Inverness on 26 February, but he has been named in Billy Stark's national squad to face Bulgaria on 31 May.

"It's a chance to get Wylde up and see how he's looking," said the coach.

"He has gone off the radar because he has not been able to play down there.

"He has played a few bounce games, but it's an opportunity to have a look at him in training and see how he's looking."

By then, he and striker Michael O'Halloran, who has been on loan to Sheffield United, will know whether they will be on the books of a Premier League club next season, with Bolton's battle against relegation being decided this weekend.

The 21-year-old is joined in Stark's squad by two current Rangers players, goalkeeper Grant Adam and defender Ross Perry, who will hope their own futures will be decided by the time the European Under-21 Championship qualifier is played in Lovech Stadion.

Rangers' administrator is aiming for American businessman Bill Miller's takeover to be at an advanced stage by then.

Jordan Rhodes' future at Huddersfield Town is also uncertain, with top-flight clubs showing interest and his present club hopeful of holding on to the striker if they can win promotion from League One.

Stark is confident Rhodes will be in the right frame of mind for what is a crucial game for the young Scots, regardless of the outcome of the play-offs - Huddersfield are set to face MK Dons in two semi-final legs.

"The timing of the game is not one you would particularly want, a couple of weeks after the end of the season," admitted the Scotland Under-21 boss.

"Jordan is involved in play-offs and you're ready to deal with euphoria or abject disappointment depending on how it goes.

"But he's such a level-headed boy that he will be fine and he's desperate to contribute to our cause."

Stark has named an experienced squad, with Tottenham Hotspur's Jordan Archer the only player in the party still uncapped at under-21 level.

The goalkeeper born and bred in Walthamstow was first called up by Stark in September.