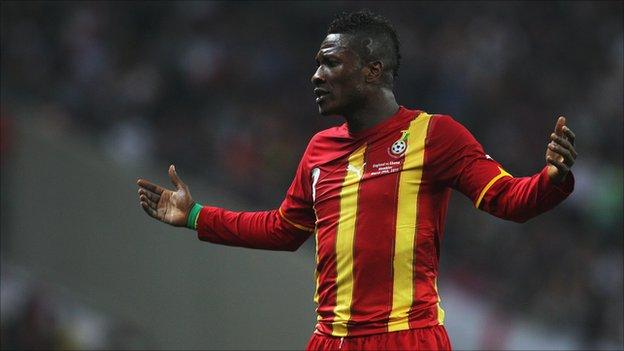 New Ghana coach Kwesi Appiah has held talks with Asamoah Gyan over his international future in the United Arab Emirates.

The Al Ain striker took an indefinite break from international football after the Africa Cup of Nations in February.

Gyan became a target for Ghana fans after his missed penalty contributed to the team's semi-final exit.

Appiah, who took charge last month, arrived in the UAE on Monday night.

Gyan, meanwhile, has said he will return to the national team at some point but has refused to say when this will be.

"I have to just psych myself up and go back strong to the team again," he told Associated Press.

"It will be very soon. I never the quit the national team.

"The national team made me more famous than any club side. I became famous when I played in the World Cup.

"I can't just ignore the national team (as) they made me who I am today."

The former Sunderland striker made history in 2006 when scoring Ghana's first goal at a World Cup finals, as the West Africans sunk the Czech Republic 2-0 in the German city Cologne.

Combining his goals at both the 2006 and 2010 finals, Gyan's tally of four is only bettered by the record of legendary Cameroonian striker Roger Milla - who boasts five World Cup goals.

Africa's qualifying competition for the 2014 World Cup begins in earnest next month, with Ghana contesting a group along with Sudan, Lesotho and new African champions Zambia.

The Zambians defeated Ghana in the semi-finals of this year's Nations Cup, winning 1-0 as Gyan's first-half penalty miss proved costly.