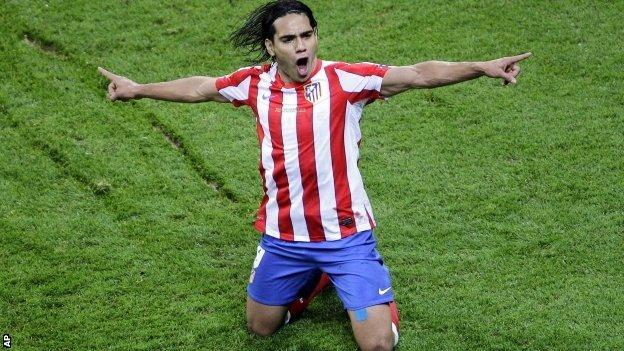 A brilliant double from Radamel Falcao and a bustling performance from the rest of Atletico Madrid undid Athletic Bilbao in the Europa League final.

The Colombian, who scored the only goal in last year's final for Porto, swerved home a superb effort before a smart turn and shot doubled the lead.

But Madrid looked just as dangerous on the counter and Diego darted through a ragged Bilbao defence to seal victory.

Bilbao's passing patterns mesmorised Manchester United in the last 16 of the competition, but it was they who were made to look dazed in the final by Madrid's high tempo and slick raids forward.

The Basque side's supply lines were cut by the snapping tackles of Gabi and Mario Suarez in the first half and, before they had time to adjust, the excellent Falcao had taken the game almost out of sight.

On seven minutes Fernando Amorebieta was transfixed by the striker's stepover and could only watch as he stroked a sublime left-footed shot into the top corner.

The final had been billed by some as a battle between Falcao and opposite number Fernando Llorente, with metro stations in Bucharest temporarily renamed after the two strikers.

But Llorente was outshone throughout and squandered half-chances to level, heading wide when well placed before shanking a volley wide off his shin.

By contrast, Falcao's brilliance was matched with ruthless efficiency and he ensured Amorebieta paid the heaviest price for needlessly conceding possession on the edge of the box 11 minutes from the break.

Once Diego had whisked the ball back into the centre the 26-year-old controlled, sent a trio of Bilbao defenders skidding out of contention with a deft turn and hammered a finish past Gorka Iraizoz.

Bilbao coach Marcelo Bielsa introduced Inigo Perez and Ibai Gomez at half-time to try and breathe life into his flatlining side and was initially rewarded.

Iker Muniain's low cross was only just cut out by Madrid's defence, before Javi Martinez headed over from the subsequent corner.

But just when Bilbao needed their talismanic striker to deliver, Llorente's out-of-sorts match continued as he failed to snap on to a loose ball in the six-yard box.

Bielsa's side piled forward as the clock ticked down, but they were restricted to snatched efforts and optimistic long-range attempts by an attentive Madrid rearguard.

Susaeta's deflected shot briefly theatened the Madrid goal before slamming into the advertising hoardings and the commanding Thibaut Courtois, on loan from Chelsea, blocked from the midfielder shortly after.

Madrid still looked the more incisive coming forward, though, and Falcao was within a post's width of his 36th goal of the season before Amorebieta was exposed once more as Diego dribbled past him to slot home a third.

Bilbao finally found a way past Courtois late on when Gomez crisp effort beat the keeper, but they were denied any scant consolation by the crossbar.

Atletico Madrid coach Diego Simeone: "Winning is always marvellous, but you enjoy it more as a player, because one is on the pitch, one can scream, run, do a lap of honour."

Athletic Bilbao coach Marcelo Bielsa: "I feel tremendously disappointed. I'm responsible for how my team played and we did not accomplish our goal.

"There was a stark difference between the teams. We played how Atletico wanted us to, allowing them to play their way in the process."