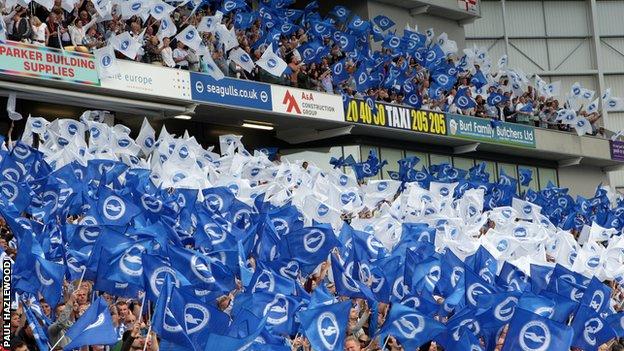 Brighton & Hove Albion may have missed out on the Championship play-off places this season but it was a memorable campaign for the Sussex club.

The Seagulls finally moved into the Amex Stadium after 14 years without a permanent home, played four cup ties against Premier League sides and saw a former Spain international join the club.

In terms of an occasion, there could only be one - Doncaster at home. It was the first league game at the club's new ground and there were blue and white flags everywhere.

It was perfect symmetry to the final game at the Goldstone Ground in 1997.

There was blanket coverage on BBC Sussex and BBC Radio 5 live were there too, as well as hoards of other media outlets.

I remember the first half being quite slow and we had to wait late, late into injury time for the drama on the pitch.

Will Buckley's winner will live long in the memory of everyone who was there.

Seagulls boss Gus Poyet, sent to the stands, was sat behind me until his million-pound signing slotted home to set hearts pounding.

The Uruguayan was quickly on his feet and the new era was underway with a win.

Of course it wasn't just league games that provided the drama.

Sunderland and Liverpool both came to the Amex in the Carling Cup.

The Black Cats were shocked by an extra-time header from record signing Craig Mackail-Smith but the Reds knocked out Albion in round three with a 2-1 win.

Meanwhile Newcastle United were the visitors in the fourth round of the FA Cup.

The winner against the Magpies - again scored by Buckley - sent a message that this Albion side could cut it with top-flight sides.

It continued the momentum and also brought a sell-out house down.

The competition is often derided but that night the Seagulls etched another few lines in their FA Cup history.

But as a reporter and a commentator if I had to pick one moment - it was Albion's home game against Derby County.

I have been lucky and privileged to have been to the FA Cup final, Uefa Cup ties and some great stadia as a broadcaster, but this just summed up the player, the Amex and the season.

Ten yards into the Derby half, he set off towards goal with a dip of the shoulder.

After going past two players and taking two others out with another dummy, Vicente then rattled the crossbar from the edge of the area.

Sometimes you just have to admire. And that's what I did.

Former Brighton striker, now BBC Sussex summariser, Johnny Byrne was sat next to me. He likened it to watching Argentina legend Diego Maradona.

I never witnessed Diego in full-flight but it was certainly a moment to behold in a season to remember.