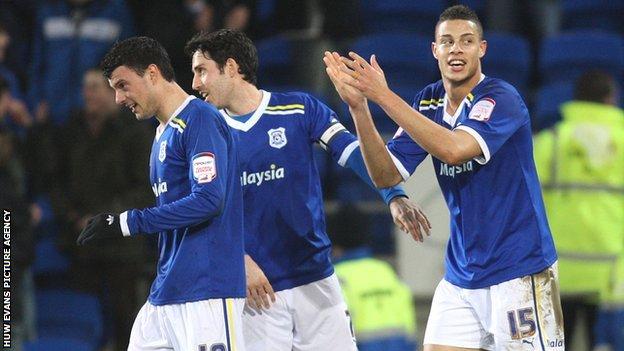 Cardiff City are considering a rebranding which could mean a change of colour and a significant cash injection, BBC Wales Sport understands.

This may involve the team playing in red instead of their traditional blue.

The club's Malaysian investors believe red is a more dynamic colour for marketing in Asia, as well as of more national significance in Wales.

No final decisions have been taken, but the owners are keen to put more money at manager Malky Mackay's disposal.

Mackay had to almost rebuild his squad from scratch when he took over last summer following the sacking of Dave Jones.

Despite the early-season disruption, Cardiff managed to reach the Carling Cup final and the Championship play-off semi-finals before losing to West Ham.

The Welsh club's main investor, Vincent Tan, is also understood to be keen to develop the club's training facilities.

The club's Malaysian owners have indicated they will invest about £100m to increase the stadium's capacity and build a new training ground.

While the shirts and club badge could change colour, Cardiff City sources categorically deny that the club - whose nickname is "the Bluebirds" - will become known as "the 'Red Dragons''.

The plan to rebrand the club, which started life in 1899 as Riverside FC, has split opinion both amongst fans and commentators.

But former Wales, Swansea and Cardiff forward Ian Walsh has no such reservations: "They [the owners] are hounourable guys... but they are businessmen at the end of the day and they realise it takes big money to succeed and the best possible place is the Premier League.

"The fans have just got to take a backseat here; if the club were to get to the highest level I think everybody would be happy. I don't think they should get into the illusion of losing identity of their club, because I don't think that would happen."

And afterwards they released a statement but none of the content touched on any future rebranding.

Part of the statement said: "We would like to assure supporters that any decisions will include the long-term interests of our supporters, our community and the survival and development of Cardiff City Football Club in a highly competitive and modern sporting industry.

"As a club we... fully recognise the legitimate interests of the fans, supporters and media in the affairs of the club and their right to information in respect of the same.

"On Tuesday we met with and held discussions with representatives from the local media, along with meeting with recognised supporter group and messageboard delegates.

"During these meetings we discussed the various options going forward, all of which are to be ratified in upcoming board meetings as already mentioned.

"As such we will communicate any decisions made as quickly as possible, but it serves no interest to comment in depth at this time until those decisions have been taken.

"We would anticipate that the review will be concluded within the next week, after which a comprehensive briefing will follow."