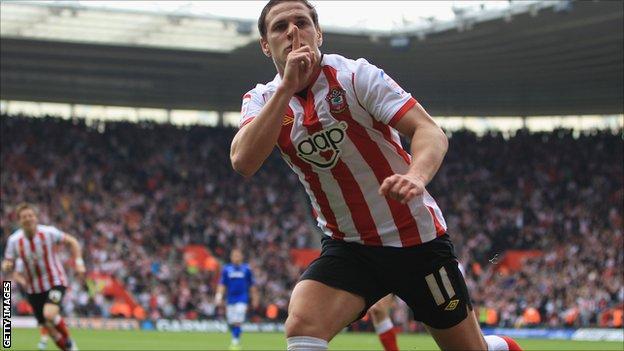 Southampton striker Billy Sharp says the club will need to sign new players to stay in the Premier League.

Sharp helped fire Saints to promotion but says three to four new players will need to come in to ensure the club are not relegated back to the Championship.

Promotion to the Premier League is expected to earn Saints around £90m.

Sharp, 26, arrived in the January transfer window and his partnership with 31-goal striker Rickie Lambert is one that showed genuine promise as the season came to a close.

The former Doncaster man, who scored eight goals in his final eight games, continued: "I finished the season well and was just starting to hit form and get fit and I was gutted that it ended.

"But I'm delighted that we got promoted and I'd prefer that to being in the play-offs."

"Saints will be delighted to be back but they will need to strengthen if they are to stay there," Merrington told BBC Sport.

"Billy Sharp and Rickie Lambert are a great partnership up front and if they get the service they will score goals. But they will need a wide, quick player to deliver.

"Saints will also need to add another striker. You need that competition, and you will need someone to fill in if anything happens to them."

The transfer window officially opens on 1 July although Adkins could strengthen from within England once the final competitive fixtures of the campaign have been played towards the end of May.

The Saints boss must also decide which players to keep on and which to offer new contracts, with several coming to the end of their current deals.

Striker David Connolly is among a group out of contract this summer.

One year left on their contracts

The 34-year-old is due to become a free agent, along with fellow first-team squad members Radhi Jaidi, Lee Holmes, Bartosz Bialkowski and Ryan Doble - unless Adkins decides to keep them on.

There are also a further nine first-team players due to become free agents in the summer of 2013.

Midfielder Richard Chaplow, forward Guly do Prado, right-backs Frazer Richardson and Danny Butterfield, winger Jason Puncheon and centre-half Dan Seaborne will all be out of contract at the end of next season.

And Merrington believes a new defensive signing could be a priority for Adkins.

"The centre-backs Jose Fonte and Jos Hooiveld are a great partnership," added Merrington.

"But they need back-up in those areas. They need players with Premier League experience to come in and provide cover if needed."