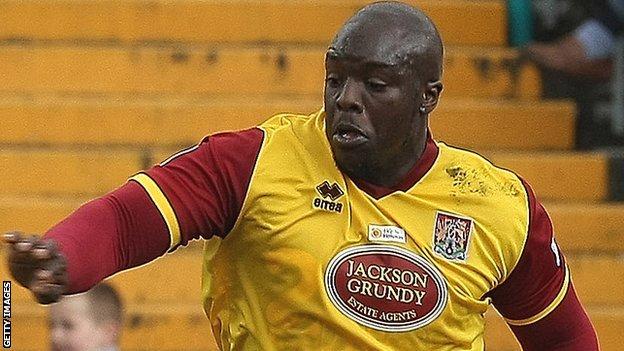 Northampton Town striker Bayo Akinfenwa has refused to be drawn on his future plans following a successful League Two campaign at Sixfields.

The much-travelled 30-year-old - in his second spell with the Cobblers - scored 18 goals to help keep the club in the Football League for next season.

"Football is what it is," Akinfenwa told BBC Radio Northampton.

"Everyone knows my love for Northampton, I always try to give my all for the club."

Akinfenwa continued: "You never really know what's going to happen or what's just around the corner.

"I didn't think the new manager [Aidy Boothroyd, who succeeded Gary Johnson last November] would come in and bench me for nine matches.

"We'll just have to see what happens and hopefully when next season comes around I'll be where I'm meant to be."

Akinfenwa, who still has a year left on his existing contract, returned to the Cobblers last May.