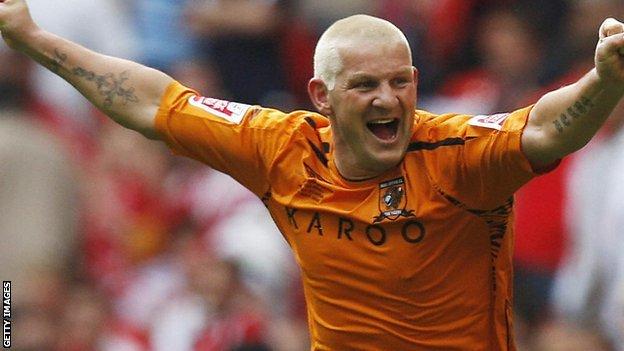 Former Hull City striker Dean Windass would love a chance to return to the club and work alongside whoever is installed as their new manager.

The Tigers sacked Nick Barmby, a team-mate of Windass during the latter's second stint with the club, on Tuesday.

Windass has a dream of managing his hometown club but admits a job on the coaching staff is more realistic.

"I'd love to go back whether that be as reserve coach or maybe striker coach," he told BBC Radio Humberside.

A number of managers have already been linked with the vacancy, with former Preston, Derby and Nottingham Forest boss Billy Davies currently the favourite with bookmakers.

"I've put my CV in to the football club, (but) I'm not saying I'd get the manager's job, I don't think I would," Windass added.

The following year, he scored the only goal in the play-off final against Bristol City at Wembley, sealing Hull's promotion to the Premier League for the first time.