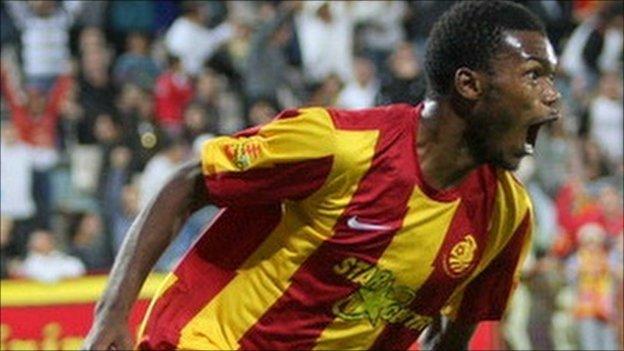 The striker, 22, signed a five-year contract with the club on Monday, leaving Israeli side Ashdod Sport Club in an US$1m transfer.

"Being African champions has helped to raise the name of Zambia worldwide," he told BBC Sport.

Kola missed the Nations Cup triumph after failing to make the final squad but he still believes he has benefitted from the country's inaugural African crown.

"It will definitely help more Zambian players move to Europe and other overseas countries," he added.

"Despite winning the Africa Cup, I believe Zambia has not said the final word yet until we qualify for the World Cup."

Kola will hope he can change that history, having already represented his nation at Fifa's Under-20 World Cup in Canada five years ago.

Although Belgium is a country where many Zambian legends made their mark in the 1980s, no Chipolopolo player has been transferred to that country in over a decade.

Kola says he wants to use the move to Belgium as a stepping stone to bigger leagues.

"I am very excited. It's definitely a big step in my career but I don't want to end here," he said.

Though Kola missed the Nations Cup hosted by Equatorial Guinea and Gabon earlier this year, he says his current target is to return to the Chipolopolo squad.

He was part of the squad but missed out on making the Nations Cup squad when missing a deadline for players to be in camp because he was contesting key matches in the Israeli league.