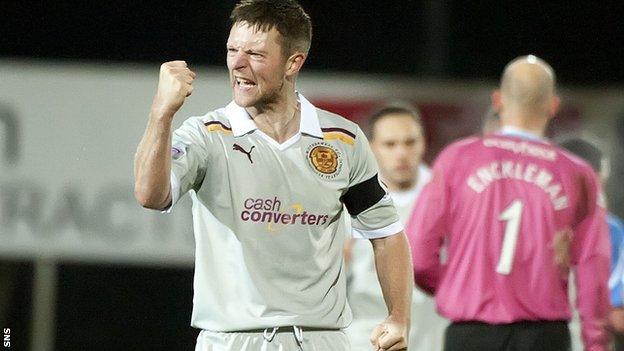 Motherwell club captain Stephen Craigan is to retire at the end of the season.

The 35-year-old defender, who won 54 caps for Northern Ireland, stood down from international football in July.

And recent injury problems mean he has not played for Well since 3 March as the club looked to clinch third spot in the Scottish Premier League.

"I take a lot of pride that I've represented the club 378 times and in wearing the claret and amber colours," Craigan told the club website.

At times, I'm sure I was hard work, but it was all for a good cause, winning

"When I joined the club in 1994, I had no idea that I would spend the majority of my adult life and footballing career at Fir Park.

"My aim was to play football professionally and today I can say I achieved my goal and it's been a wonderfully satisfying journey.

"It was a privilege to follow in the footsteps of some great players who've played not just at Fir Park over the years but at centre half."

Craigan left for Partick Thistle in 2000 but returned to Fir Park three years later and had a brief spell as caretaker manager before Craig Brown took over following the departure of Mark McGhee in 2009.

Present manager Stuart McCall said in February that he hoped Craigan would be able to play on and earn a new contract.

At the same time, reports suggested that he was in the running for the managerial vacancy with Glentoran back in his homeland.

A career in coaching appears likely to be Craigan's next step, although he has also had a parallel career in recent years as a BBC Radio Scotland pundit and presenter.

"I want to thank all the players that I've played with throughout my career, past and present," he added.

"At times, I'm sure I was hard work, but it was all for a good cause, winning.

"I've learned a great deal from all the managers I've worked under and I hope I set a good example for them with my work ethic."

Craigan, the most-capped player in Motherwell's history, created an unwanted record in January when he broke Darren Dods' record of seven own goals in the SPL when he deflected into his own net against Dundee United.

Retiring from playing means Craigan will miss Motherwell's debut in the Champions League qualifiers next season after McCall's side secured third spot.