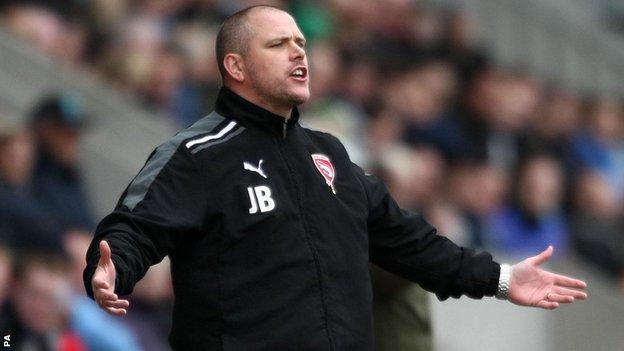 Jim Bentley says his first season as manager of Morecambe has been a "good learning curve" although he expects next season to be more difficult.

The 35-year-old former Shrimps captain, who was appointed in May 2011, led the club to 15th place in League Two.

"It's been very hard work. It's another challenge next season. It'll be a tough second season for myself as a manager," he told BBC Radio Lancashire.

"The league will only get stronger, with the likes of Fleetwood coming up."

Bentley added: "I think the teams coming down - Rochdale, Chesterfield, Exeter, Wycombe - all know what League Two is about."

Morecambe started the season brightly and were in contention for a play-off place, but they were hit by injuries in the second half of the season and managed only won win in their last nine games.

"This season has been a good learning curve for me, I've really enjoyed it," he added.

"The fans have been great to me and really got behind me, but I'm looking forward to a rest now. I'll get a couple of days away hopefully and regroup."

The former defender, who moved to Morecambe in 2002, has already started reshaping his squad by releasing long-serving midfielder Garry Hunter, along with youngsters Niall Cowperthwaite, Sean Breen and Joe Culshaw.

Bentley admits finances are tight at the club: "What we've got to do now is look where we can strengthen. In this day and age, the way Britain is as a whole, football clubs are struggling as well for pennies.

"We've been hit with a couple of low attendances this season, lower than what was budgeted for which has hit the board in the pocket.

"What we'll be doing over the summer is getting a good group of lads together that are going to have a crack at it again next season."