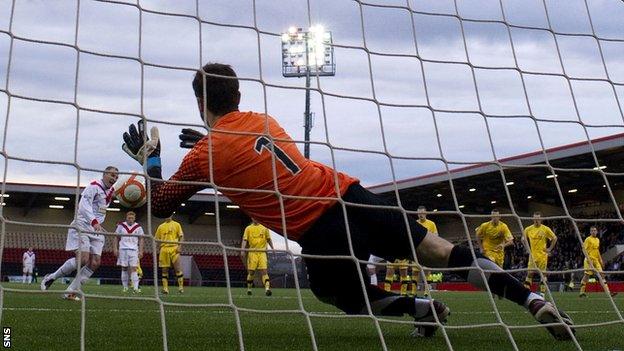 Paul Lovering missed a penalty in a goalless draw as Ayr United frustrated Airdrie in the first-leg of their play-off semi-final.

Ryan Donnelly came close for the hosts in the opening stages but could not find a way past Kevin Cuthbert with a long-range drive.

Cuthbert faced a much sterner test minutes later, Donnelly with another stinging effort but this time tipped round the post.

The best chance of the half fell to Lovering after Donnelly was brought down in the area by Christopher Smith.

The defender stepped up for the spot-kick but Cuthbert produced a fantastic save to push it round for a corner.

Chances were created at either end after the break but both sides were guilty of wasteful finishing.

Donnelly came closest again in the second half but this time saw his effort cannon back off the crossbar.