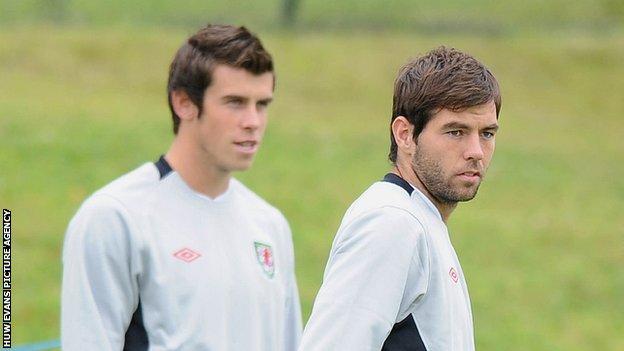 Wales will be without star midfielders Gareth Bale and Joe Ledley for the friendly against Mexico in New York on Sunday, 27 May.

Tottenham wing Bale and Celtic's Ledley plus Sunderland's David Vaughan, Darcy Blake of Cardiff and Neal Eardley of Blackpool are ruled out injured.

Wales manager Chris Coleman will now take a 22-man squad across the Atlantic as he prepares for 2014 World Cup qualifers in September against Belgium and Serbia.

Lynch qualifies through his Barry-born father and has replaced Blackpool player Neal Eardley.

The 24-year-old is a team-mate of Wales defender Chris Gunter and made his Championship debut with Brighton while a youth player in 2006.

He joined Forest from the Seagulls midway through the 2008-09 season.

Lynch was not on the stand-by list when Coleman's squad was announced on 10 May, but he joins a Wales squad including Craig Bellamy for the trip to America.

The player's profile on the Nottingham Forest website states his nationality as English, but the Football Association of Wales has confirmed his Welsh heritage.

Eardley and goalkeeper Wayne Hennessey will miss out with a torn cruciate ligament, but Liverpool striker Bellamy - whose continued participation with Wales had been in question - will make the trip.

Captain Aaron Ramsey, the Arsenal midfielder who along with Bale could feature in the GB Olympic team, is also selected.

It's not me burning bridges with these experienced players

Bellamy is also in a provisional 80-man squad for the London Games.

Coleman hopes the 32-year-old will prolong his international career to play in the 2014 World Cup qualifiers, which begin in September.

"If Craig wants to make a statement about what he intends to do maybe that will quash all the rumours.

"But he is very, very much a part of us going forward about this next campaign and we will have a better chance of doing something special with Craig rather than without him.

"Until he tells me otherwise I'm going to continue to pick him."

Missing out on selection are striker Rob Earnshaw, and defenders Danny Gabbidon and James Collins.

But Coleman insisted the trio are still in his plans for the qualifying campaign.

"James Collins has lost his place with Ashley Williams really being really the mainstay and Darcy Blake has done well at international level," explained Coleman.

"They haven't done anything wrong there. James has had a long hard season, he has had a few niggles.

"I may learn other things from players I don't know so well. I spoke to Robbie and Danny and they are fine.

"It's not me burning bridges with these experienced players. On the contrary - they are very much part of our make-up and squad going forward."

West Ham United midfielder Jack Collison has been left out as Coleman wants to give him a rest after playing more than 30 games this season, a decision the manager said he made before he was injured.

Collison dislocated his shoulder as the Hammers beat Cardiff in the Championship play-off semi-finals, but he returned to start in the final on Sunday as West Ham beat Blackpool 2-1 at Wembley to return to the Premier League at the first time of asking.

Eardley was also part of that final with Blackpool, picking up a knock that rules him out of the trip to New York.

The only other new face in the squad is Chelsea goalkeeper Rhys Taylor.

Wales's friendly with Mexico at the MetLife Stadium is effectively Coleman's first proper game in charge.

He was appointed before the 1-0 defeat by Costa Rica in February, a match to honour former manager Gary Speed.

Coleman decided to take a back seat for that match, with assistant Osian Roberts in charge, as Wales paid its respects to Speed on an emotional night in Cardiff.