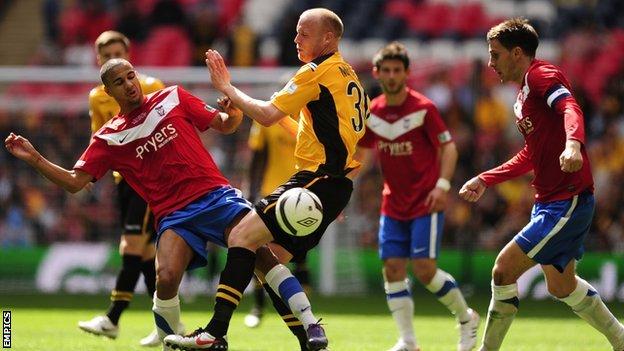 County forward Romone Rose missed an early chance when he fired straight at keeper Mike Ingham when one on one.

Matty Blair opened the scoring when he raced onto Ashley Chambers' through ball and lifted his effort over Exiles keeper Glyn Thompson.

Chambers' low centre was then tapped home at the far post by Lanre Oyebanjo as the Minstermen cruised to victory.

York will now be hoping to achieve a Wembley double when they face Luton under the arch in next Sunday's Blue Square Bet Premier play-off final.

Blair's opening goal saw him continue a fine run of form that had seen him score the winner against the Hatters in the semi-final of the Trophy and Mansfield in the play-off semi.

York City last played at Wembley in 2010 when they lost 3-1 to Oxford United in the Blue Square Premier play-off final.

The occasion proved to be a match too far for Newport and their manager Justin Edinburgh, twice a Wembley winner with Spurs in his playing days.

Both sides were greeted on to the pitch by a wall of noise from their vocal travelling contingents and the game started at a fast pace.

Former QPR man Rose should have scored the opening goal when he broke through from the half-way line after County cleared their lines from a York corner but he placed his low shot far too close to Ingham, who saved with ease.

Neither side could settle into a rhythm and it was a further quarter of an hour until the next chance worthy of the name, Minstermen midfielder Patrick McLaughlin's well-struck 20-yard half-volley deflecting agonisingly past the right hand post.

Newport were playing at Wembley for the first time in their history but were clearly not being overawed by the occasion.

That forced Gary Mills's side into action and McLaughlin thumped an effort wide from 25 yards after a neat free-kick routine before Jon Challinor forced Exiles custodian Thompson into a low save in the final minute of the first half.

With the match fast approaching its final quarter it was a moment of quality that broke the deadlock.

Chambers dinked a clever ball between the County centre halves and Blair ran through to lift it over Thompson from 18 yards and spark pandemonium in the York end.

Edinburgh quickly made a double substitution, with Rose and Jarvis making way for Elliott Buchannan and Jake Harris.

But before the subs could get into the game it was 2-0, McLaughlin floating a wonderful ball into the path of Chambers, who sent an inviting cross across the box for Oyebanjo to convert from close range.

Despite the game looking to be beyond them, the Exiles continued to press and Ishmael Yakubu's header beat Ingham only to hit the post and bounce to safety before fellow centre-half Gary Warren struck a half-volley just over.

York held out for their first win at the new Wembley Stadium in what was their third attempt and they will now look to repeat the feat next Sunday to earn a return to the Football League after an eight-year absence.