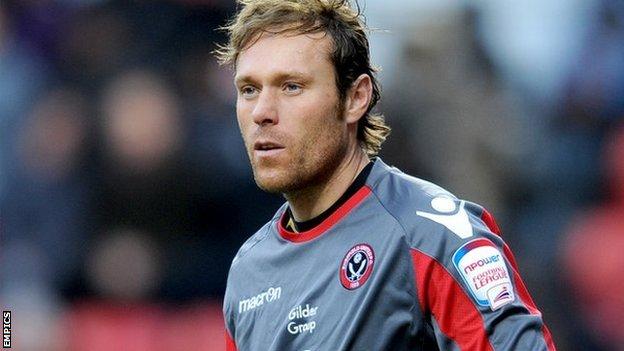 Sheffield United goalkeeper Steve Simonsen acknowledged that his side will be seen as the favourites to go up via the League One play-offs.

The Blades travel to Stevenage for the first leg of their semi-final on Friday, before hosting Boro on Monday.

"The bookmakers will see us as the favourites. We have the best points and goalscoring record of the four teams," he told BBC Radio Sheffield.

"We have to go out there now and justify that tag."

The Blades finished 17 points ahead of Boro, who ensured their place in the play-offs with a final day win over Bury, in the League One table.

Simonsen believes United know what to expect from their opponents, having played out an exciting 2-2 draw with them at Bramall Lane last month.

"They're a hard-working, tough and organised side," the 33-year-old continued.

"They like to get the ball forward quickly and they're a big threat from set pieces.

"Having just played them, we know exactly what to expect but I think we've got more than enough to come out on top over two games."

United lost the second automatic promotion spot to local rivals Sheffield Wednesday after spending much of the season in the top two, but despite that disappointment, Simonsen is ready to embrace the play-off format.

"They've been there for many years now and everybody knows the score, if you finish third you're in the play-offs.

"They're a great spectacle and they give teams plenty to play for towards the end of the season and I know everyone here is looking forward to it now," he added.