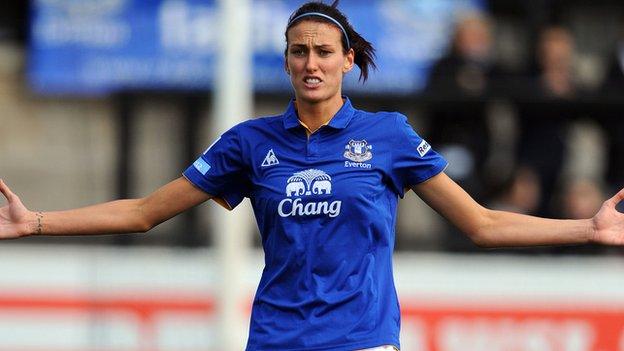 The men's football season might be coming to an exciting finish, but in the Women's Super League we are just getting into gear ahead of a big summer.

The Olympics moved a step closer when Great Britain were drawn against Brazil, offering the chance for players like myself to compete against the world's best player in Marta.

It would be a once in a lifetime opportunity to play at Wembley in that game, but of course there are more immediate concerns such as being selected for the squad.

The group in the running to play for Team GB was trimmed to 49 players recently, so the tournament is coming into view at a real pace.

But I have to focus on an important game for England against the Netherlands in Salford on 17 June, and Everton's season.

Life is pretty hectic for me most of the time because I juggle two jobs in addition to my playing commitments.

Being a semi-professional footballer means that although I get paid by Everton and am fortunate to have a central contract with England, they add up to a part-time job in monetary terms.

So I supplement that by doing a day or two each week coaching at Gateshead College and I also work in the media department for Everton too.

I'm pretty lucky in that both jobs are pretty flexible, so it allows me to do them around my training schedule.

We tend to train with the club twice a week and then I will do two or three other days personal training accordingly.

The important thing now is I get time to recover from games and training. When I first signed for Everton I was back to Gateshead most evenings and it almost killed me. Nowadays I travel back to the North East once or twice a week.

So far this season, we have lost against Arsenal, drawn with Birmingham and beaten Lincoln. It's been a satisfying start compared to last term and even now the league seems to be more competitive than a year ago.

Chelsea's FA Cup semi-final victory over the Gunners proved that. It was a shock to a lot of people.

Although we are on part-time contracts, I don't class playing football as work

Following the Birmingham game, several England players and I attended the Professional Footballers' Association Awards do at the Grosvenor Hotel in London.

We travelled down straight after the match and got ready on the train so that was quite high class, and we turned up at the hotel looking a bit bedraggled!

With half of us still in our tracksuits, I think the hotel staff wondered who we were.

And as we were the only full table of women there I think people thought we were WAGs at first.

But we met quite a few players including PFA Young Player of the Year Kyle Walker, Arsenal's Alex Oxlade-Chamberlain and Manchester City's Joe Hart, and everyone was supportive and interested in what we were doing there.

Although we are on part-time contracts, I don't class playing football as work. You are used to doing all the training from a young age so I don't see it as a job.

At one point I could have chosen to be a runner rather than a footballer.

I won the London mini-marathon in 2000 and was competing for English Schools as well, but I couldn't combine football and athletics.

At the time, a lot of people thought I would have taken up running because I was achieving more in that than in football but it didn't mean as much to me.

Football has always been my first love and I think a few people were disappointed that I chose football, but looking back now I don't regret it.