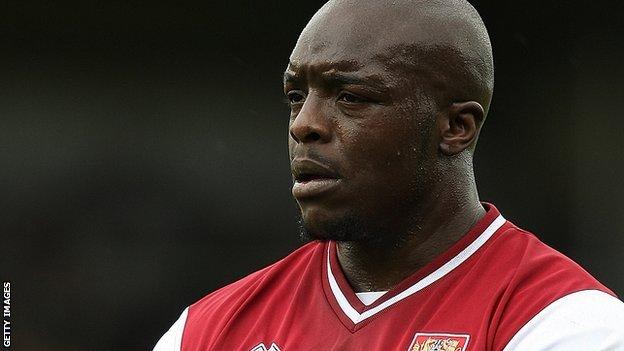 Akinfenwa scored 18 goals in 2011-12 to jointly lead the League Two top goalscorers table, but could be sold.

Boothroyd told BBC Northampton: "I'd consider it. Bayo has done great but he's at an age where his next contract will be his last.

"Do I want to lose him? Absolutely not. But if the price is right, all our players are for sale."

Akinfenwa has an incredible goal ratio of one in two for Northampton Town and as a massive fans' favourite it would be risky to sell him.

However, he's 30, and the boss could probably use any funds to get a couple of strikers in who play more to his system.

Boothroyd is happy for him to stay but will be tempted if there's bids.

Akinfenwa has another year on his contract, having re-joined the club from Gillingham last summer.

He has scored 57 goals in 118 starts for the Cobblers in two spells at Sixfields.

"I had Heidar Helguson, who was a fantastic player for Watford," reflected Boothroyd.

"He wanted to go and in the end he left. Half of that money was ploughed back into the budget and we ended up getting promoted because I could get three or four players to make the squad stronger.

"It's not about one individual, it's about the club and everybody contributing to that and being successful. You can't do that if you're always relying on one or two men.

"We're speculating, we've got to cover the scenarios but there's nothing to talk about."

"Neal has been offered a short-term contract to January," added Boothroyd. "We think Shane Higgs is going to be back around September so Neal might get the chance to be a number one again."

Boothroyd also remains resistant to letting Jacobs leave his home-town club for anything less than a suitable offer.

"I think I know a good wide player when I see one, having worked with Adam Johnson and Ashley Young. I see that in Michael," said Boothroyd.

"It doesn't make any sense that we'd let him go for £200,000. Unless someone's prepared to put up some proper money, it's going to go to a tribunal."

Byron Webster, Jake Robinson and Arron Davies have failed to hold down regular first-team places under Boothroyd and the manager admits they are not in his plans.