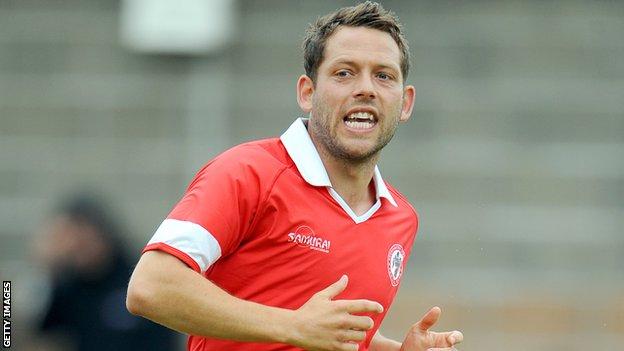 Richardson and boss Paul Cook, who took over from John Coleman in February, are working hard to achieve their aims.

"The season has finished for a few people. It won't finish for us for some time," he told BBC Radio Lancashire.

"We'll be working tirelessly to get the best squad we can together to go and try and win the league next year."

He added: "We're really thoroughly looking forward to next year."

After the duo took control in February, Accrington won just three out of 18 matches, losing 10, but Richardson believes new signings will boost the club.

"You have agents on the phone all the time and you have your own personal targets, so we'll chase them up as quickly as we can now the season has come to a close," he said.

"We'll try and tie them down as quickly as we can to get a bit of optimism for next season."

Richardson, 32, confirmed Stanley have offered some unnamed players new contracts and are awaiting a response.

"They know their offer, they'll have a think about it or try and get something better and we'll speak to them again in the next few days. It'll be interesting times," he said.

The defender, who had a brief spell as caretaker manager following the departure of Coleman, admits he did not anticipate entering management this season.

"It has maybe come five years sooner than what I thought," he said.

"I've got a head start on quite a few people. But I've thoroughly enjoyed it, I'm working hard, and I think we'll be OK."