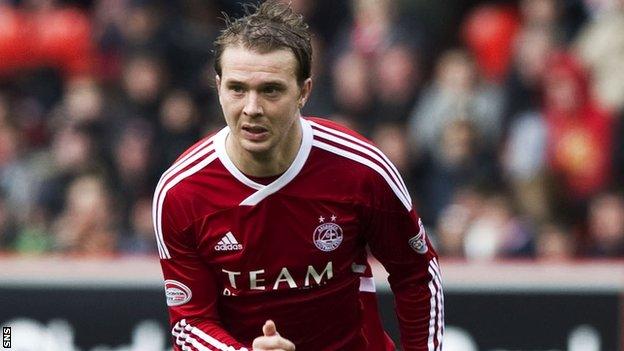 Striker Darren Mackie will captain Aberdeen to mark his final appearance for the club.

The 30-year-old will lead out the side at Pittodrie against St Mirren on Saturday.

Mackie told the club website: "This is my 13th full season at the club, so it has been a long time and it has been a huge part of my life.

"I love the club and I'm still a supporter at heart, so it will be sad to leave."

I need to find somewhere else to play my football

Mackie has spent his whole career with the Dons, apart from a loan spell with Inverness Caledonian Thistle in 2004, and was given a testimonial against Villarreal in July.

He is one of six first-team players who have been told they are no longer part of manager Craig Brown's plans.

"I have loved pretty much every minute of it. There have been big highs and lows, but overall it's been a great time," said Mackie.

"I wish the club all the best for the future and I hope they can get back to the very top."

Mackie said he remained open-minded about where he would continue his career.

"I just need to find somewhere else to play my football," he added.

"I have not spoken to anyone other than my agent. I will need to sit down over the coming weeks and see what is out there and discuss it with the family as well."