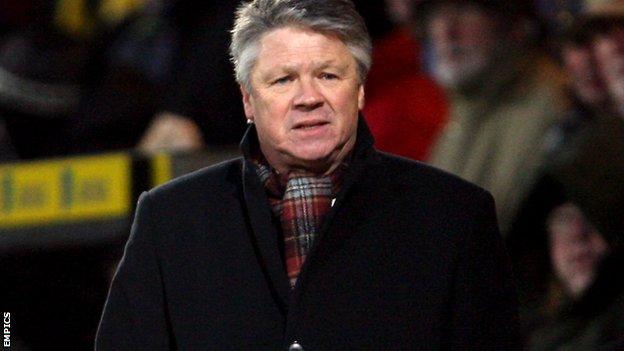 Perryman of the season on Saturday and has been in intensive care ever since.

"He is very ill and will be for a while to come, we are hoping that he will recover," Tisdale told BBC Sport.

"We don't know the full extent of this episode and how it'll affect him."

Tisdale added: "It's going to be a long process whatever happens."

The biggest issue in all this is him, and his family, and him making a full recovery as opposed to the job he does at Exeter City

Perryman was taken ill during the second half of Exeter's game with Sheffield United, but Tisdale did not know about the problem until after the game had ended.

The former Spurs midfielder's role as director of football at Exeter is particularly important as Tisdale tries to secure players for his squad for next season.

The club were relegated to League Two last month after three years in League One.

"He's got a great deal of worth and a lot of value, particularly now," Tisdale said.

"He's been a cornerstone of the coaching department, the advice and experience he brings and the tenacity and energy he brings for doing things in a proper way and making this place function.

"He's going to be sorely missed for that work he does, [but] that's not to say we've given up hope that he won't be back here helping us again.

"But the reality is that when you have someone so valuable, clearly when they're not here you recognise that value.

"The biggest issue in all this is him, and his family, and him making a full recovery as opposed to the job he does at Exeter City."