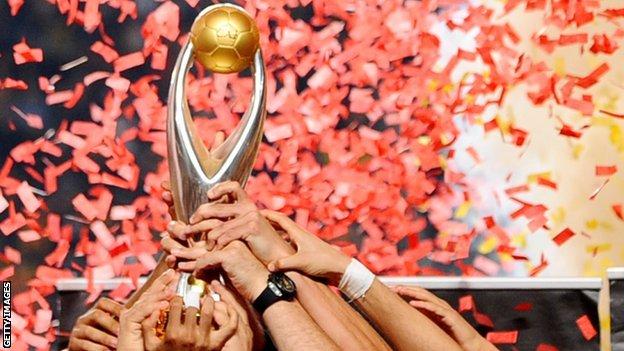 DR Congo's TP Mazembe were pelted with bottles as they arrived in Sudan for an African Champions League against Al Merreikh.

The squad have now been told to remain in their hotel for their own safety, but hope to train on Friday.

Despite the problems the club's vice-president Mohammed Kamwamya remained defiant when he talked to the BBC.

"Whatever they've done will not matter to TP Mazembe, we know it's all about the 90 minutes on the pitch," he said.

Four-time African champions Mazembe hold a 2-0 lead from the first leg in Lubumbashi a fortnight ago.

The winners of the tie will qualify for the group stages of the Champions League while the losers drop into the Confederation Cup.

Another six of the eight teams for the group stages will be decided this weekend after the third round second leg games.

The final spot will be decided on Tuesday as Egypt's Al Ahly host Stade Malienin a postponed match.

The Confederation of African Football agreed to delay the match after Ahly were trapped in Mali as political violence erupted in the country.

Malien won the first leg 1-0 thanks to a last-minute goal from Lamine Diawara.

Berekum Chelsea of Ghana have been told to follow the example set by their English namesakes as they try and make the last eight of the tournament.

After scoring 10 goals in four matches en route to the third round, the Ghanaians were held 0-0 by Cameroonian visitors Coton Sport two weeks ago.

While Coton Sport talk confidently of clinching a place in the mini-league phase, Berekum's Dutch coach Hans van der Pluijm has told his players to learn from the Barcelona-Chelsea epic last month.

Down to 10 men and trailing by two goals in a European Champions League semi-final at the Camp Nou, the London club clawed back to draw 2-2 and clinch a place in the 19 May final against Bayern Munich.

"This tie is far from over. Nothing is impossible in football - look what Chelsea achieved in Barcelona against all odds," van der Pluijm said.

"Obviously, the best chance of victory usually comes at home, but we have to concentrate on the second leg in Cameroon and make sure we progress to bring pride to Ghana.

"The result hinges on the commitment and determination of my players and they normally deliver when pushed."

France-born Coton Sport coach Robert Boivin responded: "We achieved a first-leg draw thanks to tactical discipline and goalkeeper Fiedjou Loic made several great saves. I am confident we will beat Chelsea in the second leg."

Six players from Nigerian club Sunshine Stars were also trapped in Mali after their 1-1 draw with Djoliba - Izu Azuka putting the visitors ahead and Ibrahima Sidibe equalising.

Despite their delay the Nigerian side have not asked for their game to be postponed as Ahly have done.

"Our target is to win the Champions League," claimed Stars skipper Godfrey Oboabona.

Title-holders Esperance of Tunisia and former champions Zamalek of Egypt and Etoile du Sahel of Tunisia all look capable of progressing.

Esperance hold a 6-0 advantage ahead of the long journey south to face Dynamos in Zimbabwe and no club in the 48-year history of the competition has closed such a yawning gap.

Zamalek achieved the outstanding result of the first legs by winning 2-0 away to Confederation Cup holders MAS of Morocco with the most capped footballer in the world, Ahmed Hassan of Egypt, among the scorers.

Etoile du Sahel are even better off with a 4-1 lead over second-leg hosts AF Amadou Diallo of Ivory Coast despite missing two penalties and ASO Chlef of Algeria must fancy their chances having held Al Hilal 1-1 in Sudan.