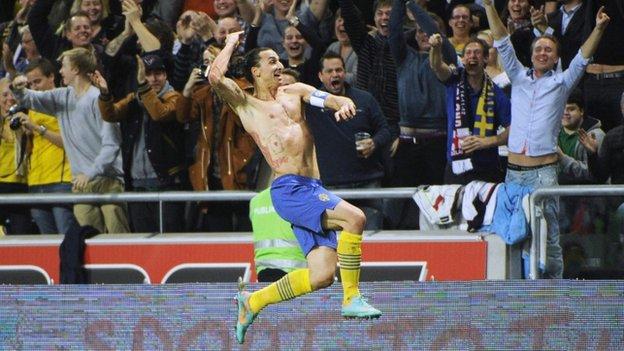 "Wait and see, I will show you," Zlatan Ibrahimovic told the English media in 2010.

The Sweden captain, who has long been a confounding figure to those outside mainland Europe, was answering questions on why his goalscoring record against English opposition had failed to match the talent, reputation and hype that had followed him around the continent.

"As always in England all the media were against me," he added. "There was all that talk: he doesn't score against English teams."

"I don't need a Golden Ball to demonstrate that I am number one."

"I have won everything in Italy. I don't know what else I can still do here, other than keep going and build a collection."

"I'd like to think I'm a spectacular player, a guy who can do extraordinary things and I'm at the perfect club [AC Milan] with this mentality."

On Wednesday night, the 31-year-old striker came good with his promise and answered his critics in devastating fashion, raising three fingers to the crowd upon sealing his hat-trick.

In his homeland he dismantled Roy Hodgson's youthful line-up with four goals of his own in a performance described by Ibrahimovic's team-mate Tobias Sana as "Zlatan against children," adding: "He has been criticised in England and this proves them all wrong."

"I remember Lionel Messi before the 2009 Champions League final for Barcelona. Then he scored against Manchester United and suddenly he was the best player in the world. Maybe now they'll say something like that about me."

Ibrahimovic has scored only three times in 15 appearances against English sides - Arsenal conceding all of them - and he failed to lead Sweden to victory over the English at Euro 2012.

His sulky on-field demeanour has failed to capture the imagination outside of the Dutch, Spanish and Italian leagues where he has delivered nine league titles in 11 years (albeit, two titles at Juventus were subsequently revoked).

What they say about Ibrahimovic

Fabio Capello: "I believe that because of his power and his technique Zlatan will become stronger than Marco van Basten."

Brian Laudrup: "Many people in Italy like to talk of how close Ibrahimovic is from becoming the best player in the world. What they seem to forget though, is that to be ranked as the best, you have to deliver in big away games. 'Ibra' doesn't do that. It's one of the reasons why he won't surpass Messi and Ronaldo."

Martin O'Neill: "Ibrahimovic is the most over-rated player in the world."

Gerard Pique: "He's a complete player, one of the best in the world."

Upon signing he commented in typically maverick style: "I don't know much about the French league but they know who I am. This is the future."

PSG are now top of the division and Ibrahimovic is the league's top scorer with 10 goals.

Ibrahimovic's autobiography 'I am Zlatan' helps unravel the enigma that has enveloped his travels throughout Europe - from his upbringing in Malmo's troubled Rosengard district to the near 70m euro (£56m) transfer from Inter to Barcelona.

A black belt in taekwondo, 'Ibra' has courted controversy on and off the pitch throughout a chequered career in which he has threatened to break Rafael van der Vaart's legs, and had a "life and death" fight with United States defender Oguchi Onyewu and a training-ground bust-up with French hardman Patrick Vieira.

Coaches do not escape his wrath either, as Pep Guardiola can attest.

Ibrahimovic said of his former boss at Barca: "I screamed at him: 'You have no balls' and things probably much worse than that, and then I added: 'You **** yourself over Jose Mourinho. You can go to hell.'

"I was totally crazy. If I were Guardiola, I would've been scared."

Sweden coach Eric Hamren has demonstrated total faith in his talisman, making him captain soon after succeeding Lars Lagerback, who stepped down following Sweden's failure to qualify for the 2010 World Cup.

Lagerback, who gave the 19-year-old Malmo forward his debut 11 years ago, says Ibrahimovic has matured into one of the best players in the world.

"One player on his own can't win a game but he can be decisive for winning matches, and Zlatan is that player for Sweden, he can do those extra things.

"He can do things that no-one else can do. He is a world-class player - we don't have many in the national team playing on a level that he is."

"Henrik Larsson said when he was playing with him that you always need to be on your toes because he can do the most unexpected things and if you focus and are ready 100% you can receive a pass that you never dreamed of."

On Wednesday, England received from Zlatan a performance they never dreamed of.