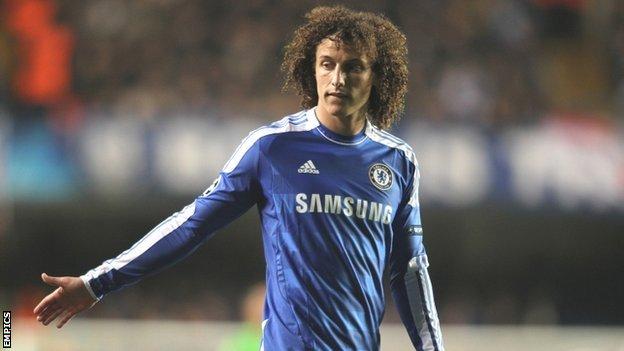 Chelsea boss Roberto di Matteo says the club will do all it can to get injured defenders David Luiz and Gary Cahill fit for the Champions League final.

Both will miss Sunday's final Premier League game against Blackburn in the hope they can recover for the showdown with Bayern Munich on Saturday, 19 May.

"We hope to have them in the group training next week," said Di Matteo.

"With the suspensions we have, we have to try our hardest and push them as hard as we can."

Chelsea are desperate to get Luiz and Cahill fit for the final in Bayern's Allianz Arena because regular defenders John Terry and Branislav Ivanovic are suspended.

Luiz was seen doing some ball work at Chelsea's training ground on Thursday, raising the prospect of him playing some part against Blackburn.

"We tried, but he wasn't ready so now we're trying for the last game," said Di Matteo.

"It's difficult to give it as a percentage. They're at similar stages - not available for Sunday, and next week we'll push them to be available for the group."

Luiz has not played since the FA Cup semi-final victory over Tottenham on 15 April, with Cahill sidelined limping off in the Nou Camp nine days later.

The added complication for Cahill is that aggravating his injury would put his England place in doubt ahead of Euro 2012.

But Di Matteo said: "We need to think about ourselves and what the club's interests are.