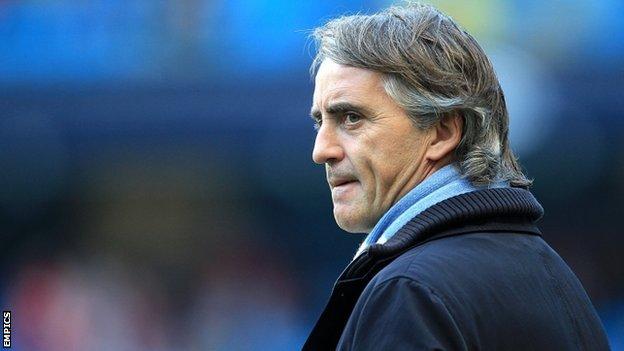 City know they will be Premier League champions if they match Manchester United's result against Sunderland.

Lee, who helped City to the 1968 title, told BBC Sport. "I'm not tortured by nerves. I've not been nervous since we got into this vein of form.

"We are a good team and if we impose ourselves we are a hard team to hold."

"It adds to the spice of the occasion that it is former City manager Mark Hughes going back to Etihad Stadium, needing a point to keep QPR up."

City trailed United by eight points on 8 April after losing to Arsenal.

But they have won five games in a row since, including a crucial victory over their neighbours and an impressive win at Champions League hopefuls Newcastle last weekend, meaning they top the table on goal difference going into the final day of the season.

"Last week was the challenge, the real big challenge," Lee said. "And we proved we are an exceptional side by going to Newcastle and virtually dominating the game. We won 2-0 when it could have been by four or five.

"If we were we going to Newcastle on Sunday, then I think it would put a lot more pressure on the team. There is still a lot of pressure on the City players, and QPR have got a desire to stop them because of their situation where a draw will keep them up.

"But City have got the home advantage and are a very good team. I think we have a pretty good chance. Don't forget United have to go to Sunderland and win there, and that's not easy."

City ended a 35-year trophy drought last season when they won the FA Cup and Lee knows just how much winning the league would mean to Blues fans.

"Do they deserve it? Of course they do," added Lee. "They are all very resilient and don't think that they are not nervous about Sunday.

"Everyone I speak to, everyone who emails, texts or tweets me, keeps saying 'what do you think will happen?'. They are so, so uptight, but let's hope it works out for them.

"Whoever wins the title it is good day for Manchester, but obviously I hope City win it."