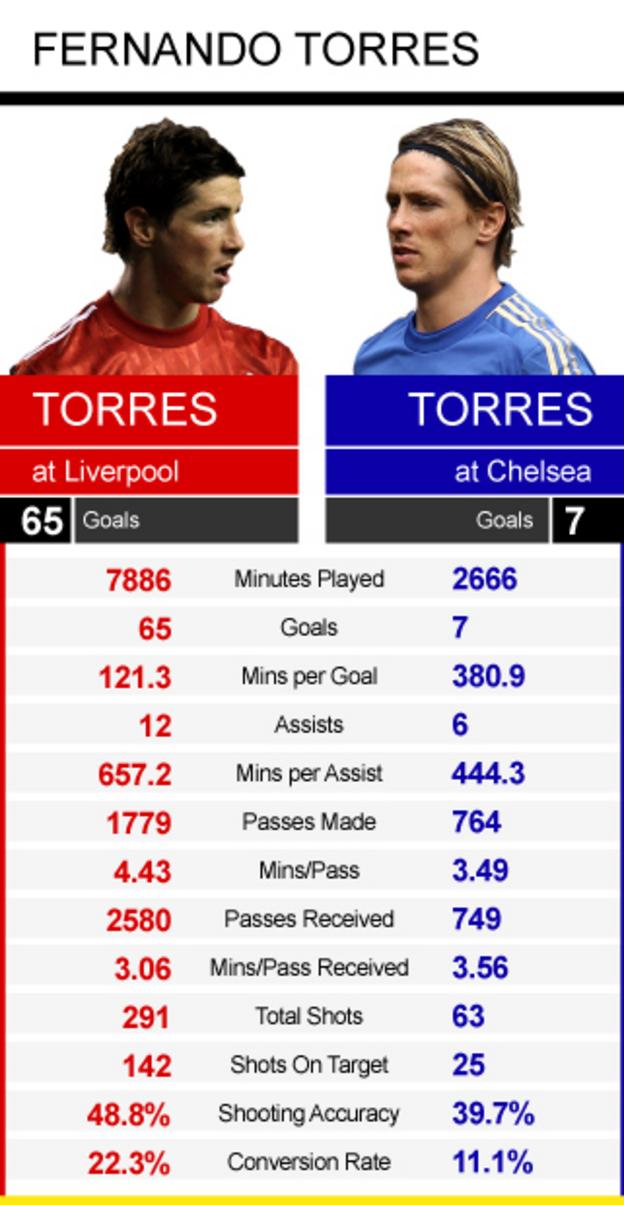 Fernando Torres claimed he was taking a step forward when he moved for a British record transfer fee of £50m from Liverpool to Chelsea in January 2011.

But, a striker who became revered and feared in equal measure during a freescoring spell at the Anfield club, he has been relegated to a forlorn and frustrated figure at Stamford Bridge - until recently that is.

The Spaniard took his goal against Barcelona which clinched Chelsea's passage to the Champions League final in cool and clinical fashion and followed it up with a hat-trick against QPR in the Premier League as glimpses of the old Torres returned.

He may have helped the Blues to the final against Bayern Munich in Europe's top competition and won a FA Cup winner's medal compared to a trophyless spell at Liverpool, but his own stock has been on a downward spiral.

Although, according to his former Liverpool team-mate Ryan Babel, Torres's recent upturn could be the start of the 28-year-old's resurgence.

"In football, you can be down but confidence can change with one game," said Babel, who is now at German club TSG Hoffenheim.

"I'm sure that [goal against Barcelona] gave him a big boost.

"I hope he keeps [the confidence from the goal] because in my opinion he is still a great player."

Dutch international Babel and 28-year-old Torres each joined Liverpool in July 2007 before the pair were both sold by the Merseysiders three-and-half years later in the same January transfer window.

I've watched Fernando Torres really closely this season and his movement has been the best in the division but Chelsea haven't had players to find him. They haven't got players that can spot a pass like Steven Gerrard used to for his movement. They had a great understanding and Yossi Benayoun was also phenomenal at it. At Chelsea, Fernando turned up at a team that didn't suit his style. He lost a bit of confidence as he ended up having to adapt his game. He was being a workhorse. He was creating his own chances which is not what he was doing at Liverpool. He's now in a team that is beginning to find him. Going forward, I would build Chelsea around him. He was that good and is still that good.

Babel watched at first hand as the Spaniard took the Premier League by storm following a move from Atletico Madrid and ripped up the record books at Anfield to become an idolised figure on the Kop.

Torres scored 50 league goals in his first 72 outings for the Merseysiders to make him the fastest player to reach the landmark in the club's history.

He also got the winner for Spain against Germany in the Euro 2008 final, was in his country's 2010 World Cup-winning squad and, overall, hit 81 goals in 142 appearances for the Reds.

When Torres did leave Liverpool it came in more acrimonious than amicable circumstances.

He submitted a transfer request just days prior to deadline day before Chelsea came in with a £50m bid which is believed to have triggered a release clause in the player's contract.

His assertion that: "I'm sure I'm doing one of the biggest steps forward in my career in joining Chelsea," did not go down well on the Anfield terraces as his love affair at Liverpool came to an end - he is still jeered by Reds fans.

Babel believes the controversy surrounding Torres's departure, along with other contributing factors, have since served to hinder Torres.

"For me it was an honour to play with him," said Babel. "He was already a big name in Spain when he was with Ateltico Madrid. I have some great memories of playing with him.

"Fernando is very quiet. He is a calm boy who trained hard. You don't hear him in the dressing room. He got on well with the whole team and is a good personality."

He added: "Maybe with everything that happened [in terms of the transfer] it had a little impact for Fernando.

"You don't get much time at a top side. They [Chelsea] put a lot of pressure on Fernando and I think that's why he struggled.

"This season, even though he didn't score as many as when he was at Liverpool, in my eyes he has done a great job at Chelsea and paid the investment [in him] with the goal against Barcelona."

Babel also believes the playing style of Liverpool and Chelsea have not helped to show Torres at his best.

"It's two different ways of playing," he explained. "At Liverpool we had players like Steven Gerrard who was great at giving balls to Fernando.

"I don't know how Chelsea train but Liverpool trained on tactics and game play and that's why he started scoring quickly and was so successful."

Torres is playing under his third manager at Chelsea following the exits of Carlo Ancelotti and Andre Villas-Boas before current Blues boss Roberto di Matteo took over as interim boss.

Whether it is Di Matteo's approach to Torres, the Chelsea manager's tactics or the confidence of the Spaniard's recent goals, Babel believes it will not be long before the lethal Torres he knew at Liverpool returns to the fore.

"Football is a team sport. Fernando depends on the balls he gets and I'm sure at Chelsea they are trying to do this," he said.

"Already this season he has improved a lot compared to last season. He is going the right way."