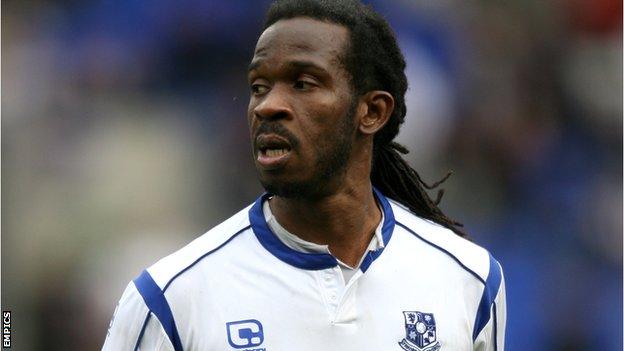 Tranmere pair Ian Goodison and Ash Taylor have signed new contracts with the League One side.

Goodison, 39, has signed a one-year extension that will take him into his ninth year at Prenton Park, should his work permit be successfully renewed.

He is the most capped Jamaican international of all time, with 120 caps after making his debut in 1996.

"I've been with Tranmere as long as I can remember and I love it here.

Welsh defender Taylor, 21, who signed professional terms in 2009, will stay at the club for another two years.

Speaking to the club's official website, manager Ronnie Moore said: "I'm pleased both players will be with us again next season.

"Ian has been a rock for Tranmere over the past eight years.

"He plays through pain, leads by example and has an incredible will to win. He is still one of the best defenders in the division and centre forwards know they've been in a game when they've played against him."

He added: "I've been really impressed with Ash since I came back to the club.

"He's a strong defender who has a bright future ahead of him."

Goodison, who spent two years with Jamaica's Montego Bay United before moving to the Superwhites in 2004, is delighted to extend his spell with the club.

"Wirral has become my second home and I'm here now more than I'm in Jamaica," he said.

"I'm grateful to all the Superwhite Army for their support over the years and hope to give them another good season."