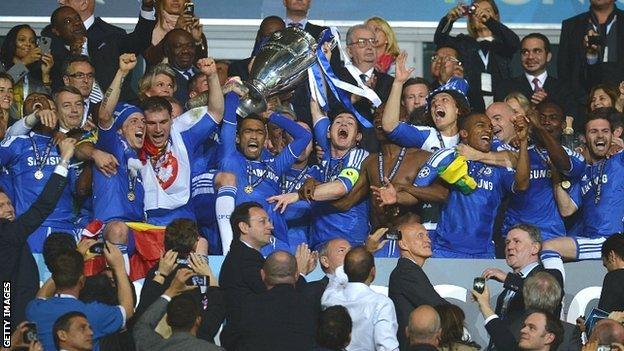 Chelsea stunned Bayern Munich in a dramatic penalty shoot-out at the Allianz Arena to win the Champions League for the first time.

Thomas Mueller's late header put Bayern on the brink of victory on home territory but Didier Drogba levelled things up with a bullet header at the death before coolly converting the decisive spot-kick.

The tournament which gave Chelsea their greatest agony when they lost on penalties to Manchester United four years ago in Moscow has now delivered the greatest glory in their 107-year history.

The momentum shifted decisively when Cech denied Ivica Olic and Bastian Schweinsteiger hit the post to leave Chelsea on the brink and present Drogba with his moment of destiny.

He was calmness personified as he rolled the ball past Neuer to spark wild scenes of elation among Chelsea's players, staff and supporters.

Suspended captain John Terry joined the celebrations and lifted the trophy alongside Lampard but it was Drogba who was the hero, running the length of the pitch swirling his shirt above his head in triumph, as owner Roman Abramovich finally claimed the prize he craved above all others.

The questions will now start about the future of interim manager Roberto Di Matteo - who has given the Russian what he wanted after so many painful failures, including that defeat on penalties by Manchester United in the rain of Moscow in 2008 which also saw Drogba sent off.

And it is hard to see how Drogba, now 34 but still able to produce the brilliance that defines big occasions, can be allowed to walk away as his contract reaches its conclusion.

This was a victory in the mould of Chelsea's semi-final win against Barcelona, built on resilience, discipline, defensive organisation and nerve at the crucial times and done without the suspended Terry, Branislav Ivanovic, Ramires and Raul Meireles.

Abramovich will leave the big decisions for another day, but this was a night he and his club have desired since he walked into Stamford Bridge nine years ago - and achieved with an interim manager he had to appoint after sacking his personal choice, Andre Villas-Boas.

Terry was locked in conversation with former England coach Fabio Capello at pitchside before kick-off, the defender looking ruefully around the magnificent arena as he contemplated missing out because of his red card in Barcelona.

And Di Matteo delivered a surprise in his starting line-up, with youngster Ryan Bertrand handed a role on the left flank in front of Cole in an attempt to stifle the threat of former Blues winger Arjen Robben.

Chelsea's blanket of defensive defiance served them well in the Nou Camp - and acted as a dress rehearsal for a first half spent almost entirely in their territory.

While the west London team were organised and resolute, they were also grateful that Bayern striker Gomez's touch in front of goal deserted him at decisive moments.

Cech saved with his legs from Robben, but Gomez was guilty of failing to control just eight yards out when Franck Ribery's shot landed at his feet, the German striker shooting wildly off target after a smart turn in the area.

Chelsea's only serious response was a shot from Salomon Kalou eight minutes before half-time that was comfortably held by Bayern keeper Neuer.

The pattern continued after the break and Ribery thought he had finally pierced Chelsea's resilience after 53 minutes, only to be ruled offside when Cole deflected Robben's shot into his path.

At times this encounter was simply a matter of Bayern's attack against Chelsea's defence.

There was a rare moment of anxiety for Neuer when he could only half-clear Cole's cross as he backpedalled, but Drogba's shot lacked power and the keeper was able to recover.

As the frustration grew among the massed Bayern support they wasted another opportunity as Mueller pulled another presentable chance well wide from inside the area.

Mueller made amends in the best possible manner though, when he headed Bayern in front with seven minutes left. He arrived unmarked onto Toni Kroos' cross to head past Cech.

Chelsea immediately sent on Fernando Torres for Kalou - but it was the man for the big occasion who delivered again in the 88th minute. Drogba won himself just enough space at the near post to meet Lampard's corner and head powerfully past Neuer, who got a touch but could not keep it out.

"Abramovich's accountants will tell you the cost of this victory. For the fans who have endured the often painful journey to eventual triumph, this experience was beyond price"

Drogba went from hero to villain in the opening moments of the extra period when he conceded a penalty after bringing down Ribery with a reckless challenge. The France international was eventually taken off injured but in the meantime Chelsea keeper Cech was the saviour as he plunged low to save Robben's poorly struck spot-kick.

Bayern had been over-generous in front of goal and were architects of their own frustration after 107 minutes when Olic tried to set up Daniel van Buyten in front of an open goal but the defender failed to react to his pass.

And so to penalties and the dramatic conclusion that gave Chelsea the biggest prize in European domestic football as the Champions League finally went to Stamford Bridge.