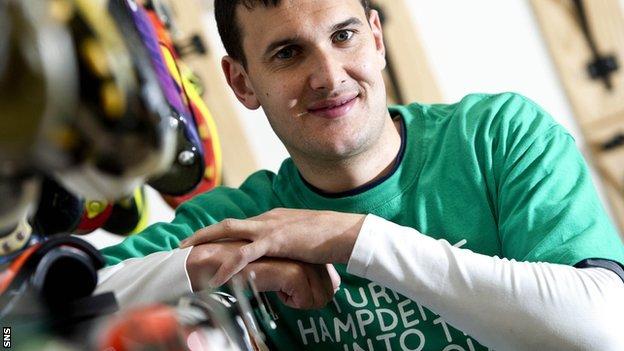 Ian Murray realises he could not only be playing for a place in Hibernian's Scottish Cup final plans but for his future at Easter Road.

The club captain, troubled with injury, has featured only three times since Pat Fenlon became manager and is out of contract in the summer.

But the 31-year-old is poised to play in Saturday's final league game.

"It's been frustrating for myself, but the best way to go out is being part of a cup final squad," said Murray.

If my future is here, fantastic. I'd love to be here for the rest of my career and move into coaching

"Being a Hibs fan, of course I want to be involved, I want to play, but I just want Hibs to win the Scottish Cup."

Should they beat Hearts on 19 May in the first all-Edinburgh Scottish Cup final since 1896, Hibs will lift the trophy for the first time since 1902.

Murray began the season as a first-team regular under Colin Calderwood, who was sacked in November, before a hip injury limited his involvement.

Under Fenlon, he has played twice as a substitute in the latter stages of matches and the full 90 minutes in the 2 January defeat by Hearts, his most recent appearance.

He will benefit from Fenlon's likely resting of players for the last Scottish Premier League game of the season, against Inverness Caledonian Thistle.

However, Murray is likely to watch on as on-loan Coventry City defender James McPake leads Hibs out for the final.

"I'm ready to play," Murray said. "It's a tough game, probably not the ideal game we needed right now.

"Anyone that takes the park on Saturday, we're all looking to get in the squad for that Cup final."

Hibs can finally consider the cup after securing SPL survival against Dunfermline Athletic on Monday.

Fenlon is still to address the futures of his out-of-contract players and eight loan players, meaning Murray is still in the dark over his future.

"I've heard nothing from anyone," added Murray, who is in his second spell at Easter Road following stints with Rangers and Norwich City.

"I love playing for Hibs and I love being here, being from Edinburgh and supporting the club.

"If my future is here, fantastic. I'd love to be here for the rest of my career and move into coaching.

"But, if the club turns around and says no, you have to go and look somewhere else. I'm fully confident in my own ability.

"I want to play football. I'm not going to hang around somewhere where I don't feel I'm going to play.

"I still think I've got at least three or four years left to give at a decent level for some team.

"I need to get some games somewhere, wherever that may be."