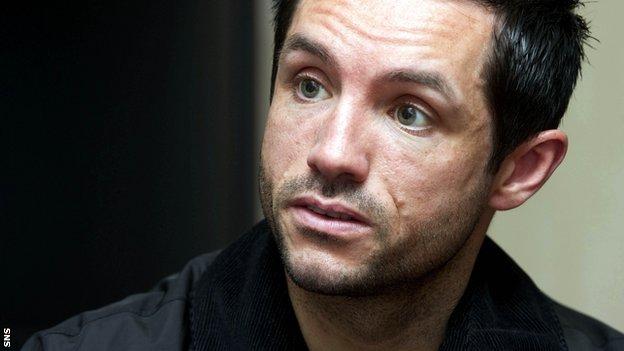 Dunfermline midfielder Gary Mason admits he and his team-mates are "in limbo" over their futures as the Pars prepare for life in the First Division.

Defeat to Hibernian on Monday confirmed that Jim Jefferies' side will finish bottom of the Scottish Premier League.

"A lot of the boys are out of contract and whatever the club decide to do is out of our hands, we have to wait and see what happens," said Mason.

"It's hard to get out of your head what happened on Monday night."

The challenge is to get out of the First Division first time of asking, that's the aim

The 32-year-old admits demotion has been hard to accept.

"I was involved in getting the team promoted which was nice but it shows you how things can turn around," he said.

"We didn't win enough games to stay up and it's not a nice thing, obviously, and the feeling is still stuck in my throat. But it's the reality and you have to deal with it and see what the future holds.

"I have been here a number of years and had great times here, I have really enjoyed it. It's obviously not nice when you get relegated but it's about how you bounce back.

"The First Division is never an easy league to get out of. It is a contrast to the SPL but that's where you want to play your football, you want to test yourself against the best.

"I'm sure young players coming through will think the same.

"The challenge is to get out first time of asking, that's the aim."