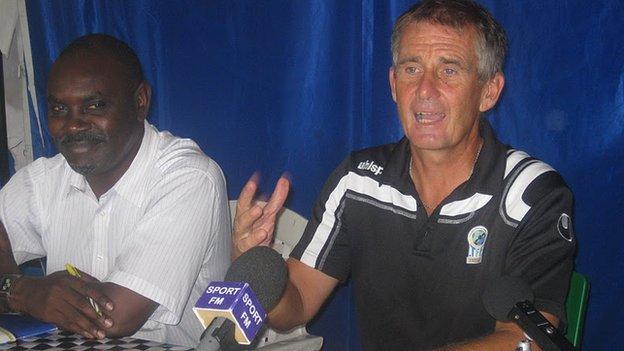 Tanzania coach Jan Poulsen has been sacked two months before the expiry of his two-year contract, the country's football federation has announced.

He has been replaced by compatriot Kim Poulsen who has signed a one-year deal.

"With (June's) World Cup and Nations Cup qualifiers, TFF thought it a good idea to have a new coach after deciding not to continue with Jan Poulsen," said TFF chief Leodegar Tenga.

"Kim has been around so he knows Tanzanian players very well," he added.

The new coach has been in the country for the last year, during which time he has guided Tanzania's national Under-17 and Under-20 teams.

His first task will be to guide the Taifa Stars in next month's 2014 World Cup qualifier against Ivory Coast and away to Mozambique in the return leg of their 2013 Africa Cup of Nations qualifier.

It has been reported that the 52-year-old will name his squad on Monday for the World Cup qualifier away to Ivory Coast on 2 June.

A home World Cup qualifying clash follows against The Gambia the following week, ahead of flying to Maputo for the Nations Cup tie on the weekend of 16-17 June.

The match is finely balanced at 1-1 following the first leg in Dar Es Salaam in late February.

Having coached several first division teams in Denmark and Singapore before arriving in Tanzania, the new Taifa Stars coach is credited with guiding the country's Under-20 side past Sudan in the first round of the African Youth qualifiers.

Jan Poulsen's dismissal comes after his vocal criticisms of the Tanzania Football Federation (TFF), who he has accused of disrupting his plans for the team.

He has also been under media attack for his policy of reshuffling his team inconsistently, sidelining key players such as TP Mazembe striker Bwana Samata.

Under his stewardship, the Taifa Stars fell in the Fifa rankings, dropping from 112th spot at the time of his appointment to their current position of 145th.

Kim Poulsen's appointment coincides with the signing of a major sponsorship contract with Tanzania Breweries Ltd, who have agreed to sponsor the national team for five years in a deal worth US$10 million.