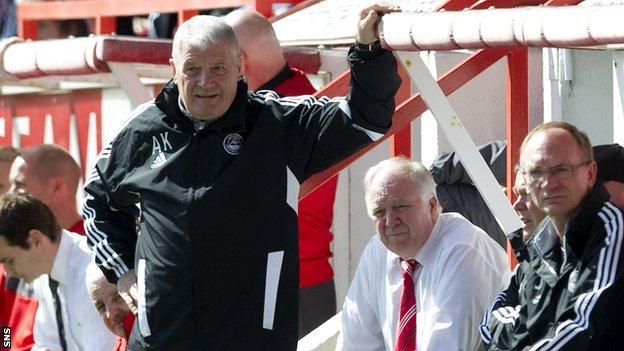 Aberdeen manager Craig Brown is "optimistic" about next season, even if he is not able to bolster his squad.

The Dons ended their season with a 0-0 draw against St Mirren and Brown's men finish ninth in the league.

I begin to see a team shaping up for next season

"I'm genuinely optimistic about next season, even if we didn't sign someone else."

Brown highlighted the role a lack of goals played in Aberdeen's season.

"When you see our goals-for total this season, you'll realise where the problem lies and in spite of the excellent efforts of Scott Vernon and in-particular Darren Mackie, we just couldn't get the ball into the net," said Brown of the goalless draw with the Buddies.

"On another day, we would have had three goals in the first 10 minutes. Unfortunately for Darren, he missed them.

"On the balance of play, the team deserved better. I felt we were the better team, we were out to win the game and St Mirren were happy to try and stifle us and get a point."

The former Scotland coach will now start rebuilding for next season.

And he added: "It'll be a busy summer but we haven't got an unlimited budget so if we got one good goalscoring player and get the seven that are unfit back in harness - boys like Peter Pawlett, Rob Milsom, Stephen Hughes, Michael Paton, Clark Robertson - I see optimism.

"Even this season, there was enough evidence that we shouldn't have been where we are and it was just a lack of ability to convert the chances that we had."