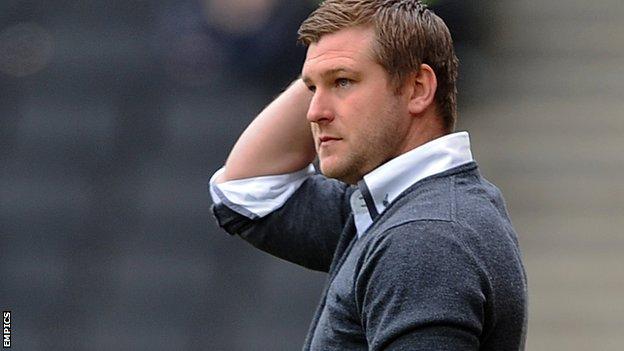 MK Dons boss Karl Robinson is adamant he has found enough weaknesses in Huddersfield to turn around his side's 2-0 League One play-off deficit.

The Terriers secured a superb semi-final first leg victory at Stadium MK through goals from Jordan Rhodes and Jack Hunt.

"I see something in this tie. I just can't put my finger on what it is," he told BBC Sport. "But I'll find more weaknesses than what I have in my head already.

"If they have complacency and we exploit it then the nerves will kick in."

The odds will be heavily stacked in Huddersfield's favour when the clubs meet up again at the Galpharm Stadium on Tuesday.

But Terriers manager Simon Grayson is adamant his side are still a long way from the Wembley final.

I look my players in the eye and I know they haven't done what they can. I've seen weaknesses today that I know we can capitalise on

"There's no chance that will be enough," he said. "With a two-goal lead we will still be very wary of the opposition.

"MK Dons are a good team and they will be disappointed they have not got anything out of the tie today.

"We haven't achieved anything until that final whistle on Tuesday night."

Grayson went as far as saying it was the best performance from his men since he took over the West Yorkshire side in February.

"Given the circumstances and the importance of the game, it definitely was," he added.

"There were defining moments. We missed chances but then Ian Bennett's made an excellent save at the end."

Robinson, whose side have failed to go past the semi-final stage of the play-offs in three previous attempts, will need to eke out a memorable performance from his squad if they are to overhaul last year's defeated finalists.

"You've got to have belief in yourself and belief in the person stood next to you," he said.

"I look my players in the eye and I know they haven't done what they can.

"I've seen weaknesses today that I know we can capitalise on."