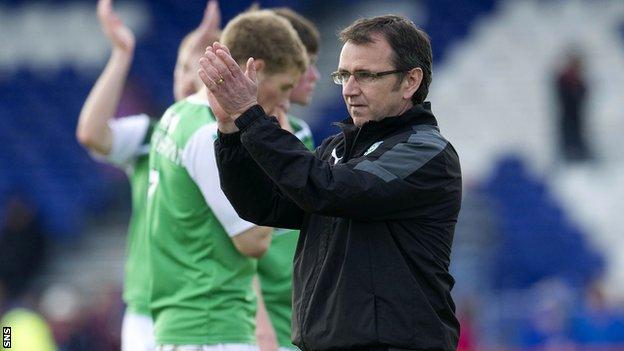 Manager Pat Fenlon is taking Hibernian to his hometown of Dublin to escape the feverish Scottish Cup final build-up.

"Even this week at training it's been a bit crazy," he told BBC Radio Scotland after losing 2-0 at Inverness.

"I just want to get the players away from that and let them focus on the job in hand, which is putting a plan together to win the cup.

"We'll get looked after well and not many people over there will have a big interest in the game."

Hibs will meet Edinburgh rivals Hearts at Hampden next Saturday, aiming to win the trophy for the first time in 110 years.

"There is a relief around the place, that's for sure," added Fenlon.

"The big goal for us was staying in the SPL and we made sure we did that with a great performance.

"We didn't deserve to take anything out of the game. It had a scrappy, end-of-season feel to it.

Turning his attention back to the Scottish Cup final, Fenlon acknowledged the scale of the match for the club's fans but wants to stay focused on his role.

"Personally, it's an opportunity to finish a disappointing season with a trophy, which would be fantastic," he said.

"I know all that goes with it in relation to anyone that's associated with the club. It's a massive day, I understand that.

"I haven't got into that too much, I'm just looking forward to trying to lead a team out and getting a plan together that can help us win."

Fenlon revealed that he has a good idea of his starting line-up for the final and was not too concerned about a knock to the foot that forced full-back Matt Doherty off late in the game at the Caledonian Stadium.

"We've probably got most of it," he explained. "There's one or two areas where we might change things around.

"But the eleven is more or less there at this stage.

"Matt got a bang but he's a young, fit lad so he should be okay."

The fringe players pressing for inclusion in the squad for Hampden did little to enhance their chances with a largely lacklustre display in the Highlands.

"There were one or two decent performances but there wasn't enough in terms of us playing as a team and as a unit," was Fenlon's assessment.