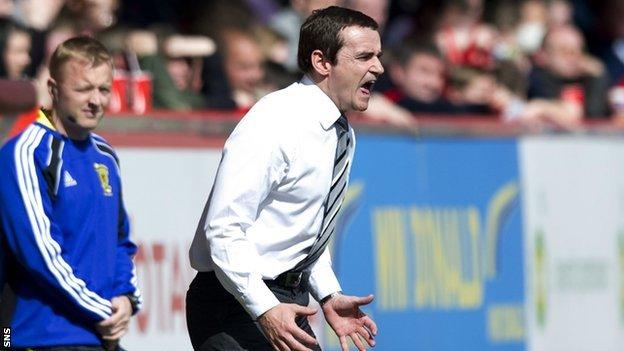 Manager Danny Lennon feels that St Mirren's eighth-place finish in the Scottish Premier League is proof that the Buddies are making progress.

In his first season in charge, Lennon secured 11th spot, with Hamilton dropping to the First Division.

A goalless draw at Aberdeen means St Mirren have improved by 10 points.

"It's been very satisfying in terms of the points accumulated and the level of performance but, more importantly, the development of the club," said Lennon.

"To come up here and finish eighth, we are delighted about that and for the wonderful support who have seen their team accomplish that.

"They have been the 12th man for us all season. I know that is a cliche, but they have been a pillar of strength for us."

The Saints finished on 43 points this term compared to 33 in season 2010/11, their reward for investment in players such as Gary Teale, Paul McGowan, Jeroen Tesselaar and striker Steven Thompson.

"It's going to be a long-term project for us but as long as we can keep climbing bit by bit and keep developing the youngsters - Kenny McLean, Marc McAusland - it gives us as coaches great satisfaction," added Lennon.

"I've got a wonderful backroom staff. They all bring something different to the table. The team behind the team is as important as the team on the pitch.

"The players, the directors, the staff, the supporters, we will continue to progress together.

"The expectation is fantastic. The fans at the beginning of the season really got on board with what we are trying to do. I'll be the first to admit it doesn't always work out for us.

"We've got one or two things up our sleeve for next season."

The Buddies' match at Pittodrie was a low-key affair, with the home fans adding some excitement to the proceedings as they urged departing striker Darren Mackie to score on his final appearance.

"Once we settled down we created one or two half chances. Just the final ball let us down," said Lennon.

"In the second half, we knew Archie [Knox] and Craig [Brown] would have got them to get tighter to the creativity that we have in the middle of the park and they did that, but we have learned how to see games out.

"The lads have been terrific. I am very proud of them."