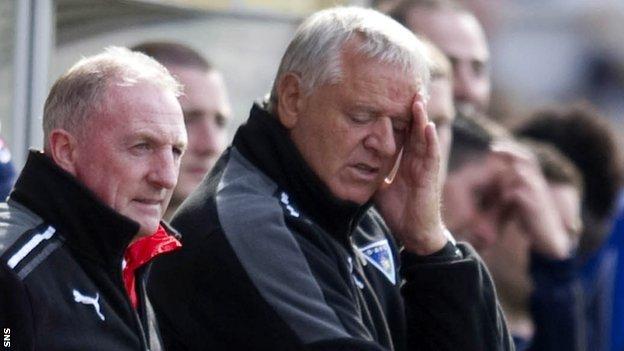 The Pars, whose relegation from the Scottish Premier League had already been confirmed, ended their season with a 2-1 home defeat by Kilmarnock.

"We've got to learn from this season," said Jefferies. "It'll not be easy because of the cuts that the club will probably have to make.

"I've just got to do the best I can with what I can bring in."

Jefferies replaced Jim McIntyre in March and, though results improved towards the end of the season, the former Hearts boss could not prevent relegation.

"These eight games were invaluable because something's got to be improved next year," said Jefferies.

"There's a lot of boys out of contract and you've got to try and see who you can take with you down at that [First] Division, whether we can afford them or not, but that's something that we'll have to discuss.

"We're meeting on Tuesday about what we're allowed to do and then we'll sort it out accordingly.

"We know there's a rebuilding job to be done so that's plenty to get into in the summer.

"It'll be a terrific division. There's a lot of good clubs. With Cowdenbeath coming in, there'll be a few more Fife derbies so we'll look forward to it."

Of the defeat by Killie, in-which Paul Willis opened the scoring for the Pars before the visitors struck two late goals, Jefferies added: "We played pretty well in the first half.

"Then in the second half, Kilmarnock started it better and we never really got into our stride.

"You knew when they equalised there was enough time for them to go and get the winner."