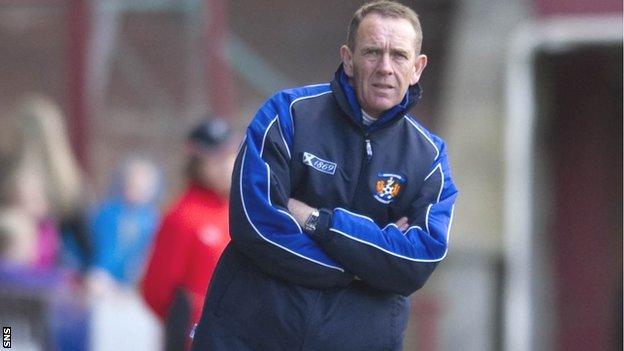 Kilmarnock manager Kenny Shiels claims he has rejected an approach from an English club in the past week as he awaits a new contract at Rugby Park.

Shiels is out of contract in the summer and has been in talks about a new deal with chairman Michael Johnston.

"I need longevity to help me plan what I'm trying to do," he told BBC Scotland after his team's win over Dunfermline.

"I want to build a team that has a long-term future together. Everyone knows I want to be here."

Shiels' side clinched seventh place in the Scottish Premier League, coming from behind to win 2-1 at East End Park, and now he wants to secure his and assistant Jimmy Nicholl's positions at the club to help the Ayrshiremen progress.

"Logic tells you I want to be here," he added.

"I'm not the sort of person who walks away halfway through my philosophy.

"We're in the early stages of a good rebuild.

"Two years ago we needed a point to stay up. Two seasons have passed and we have a long-term development plan for the playing side of the club and that takes time."

Asked about his team's league placing, which confirmed Killie as the best of the rest in the bottom half of the SPL table, Shiels said: "The league table doesn't lie but it can provide you with some misfortune and I feel we were higher than seventh."

Whether Shiels will be around to try to take Kilmarnock into the top six will depend on Johnston.

"I'm waiting on the chairman getting back to me so hopefully that will be concluded shortly," said the Northern Irishman.

"I've turned down a job this week. I was offered to go for an interview for a job on Wednesday and I didn't take it because I felt it was unfair. It was an English club, that's all I will say."

A key element in Shiels' plan is to give his younger players a chance; indeed, Killie had a youthful look in Fife.

"We had a lot of kids on and they came through the system that we are trying to produce," added Shiels.

"That is part of our long-term plan. You can see they are my type.

"They are performers - Chris Johnstone, Jude Winchester, Ross Barbour, and young Ross Fisher on the bench didn't get on because we didn't need a defender."