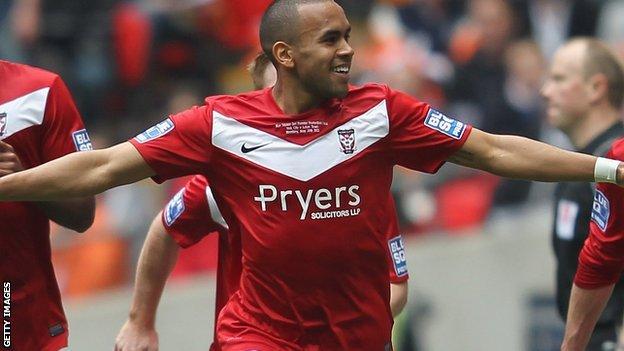 York City secured their return to the Football League after an eight-year absence as they came from behind to beat Luton Town at Wembley.

In a pulsating Blue Square Bet Premier play-off final, Andre Gray fired in Robbie Willmott's cross from inside the box to put the Hatters ahead.

But Ashley Chambers's low shot past Mark Tyler was a deserved equaliser.

Matty Blair fired in from close range, despite being in an offside position, to secure promotion for York.

It completed a Wembley double for York, who

Matty Blair - a man for the big occasion

The defeat leaves Luton to play non-league football for a fourth consecutive season.

York's victory not only left Luton, whose fans made up a significant majority of the 39,265 Wembley crowd, devastated, but also ensured the Minstermen have won all three of their Blue Square Bet Premier matches against the Hatters this season.

Luton struck the first blow of a frenetic opening half when Willmott found Gray with a low cross and the forward fired the ball into the bottom corner of Michael Ingham's net.

But York responded immediately and pegged back the Hatters before Alex Lawless struck wide from distance at the other end.

Lawless then blocked Jon Challinor's shot from the edge of the area as the opening half continued at a high tempo and Mark Tyler then tipped Walker's looping header over the bar before Gray had an attempt on goal for Luton deflected wide.

Chambers deservedly levelled for York when he fired skipper Chris Smith's hooked cross into the net from inside the box, after the Hatters defence failed to clear Oyebanjo's free-kick.

The second half resumed in an almost mirror image as York went ahead inside two minutes when Blair, who appeared to be a yard offside, latched on to Daniel Parslow's header from Walker's cross and fired in from close range.

Subsitute John Paul Kissock then forced a save from City keeper Ingham before Oyebanjo prevented him and fellow substitute Craig McAllister from finding the net and Gray should have scored soon after, but was unable to connect with the ball when six yards out with the goal at his mercy.

Luton's task was made even harder when McAllister, who had come on in the second half for top scorer Stuart Fleetwood, had to be replaced by Aaron O'Connor after suffering a facial injury.

But the Hatters, who lost on penalties to AFC Wimbledon in last season's play-off final, continued to press for an equaliser as Curtis Osano's looping ball towards goal was tipped away by the impressive Ingham.

And, after O'Connor desperately attempted to level with a shot on the turn, York's return to the Football League for the first time since 2004 was sealed.

"It feels amazing [to be playing in the Football League next season] but it hasn't really sunk in yet.

"It'll properly sink in later tonight or tomorrow when we will be celebrating it again but at the moment I'm a bit tired but I'm the happiest man ever.

"I scored the goal and it feels unbelievable but I'm not taking anything away from the other lads today. The back five, and Daniel Parslow in front, defended like heroes and were brilliant all game.

"We were under the cosh a bit last half an hour and they just stood tall and went 'right you're not getting past us'. Luton were always going to put us under pressure after we scored but we stood tall."