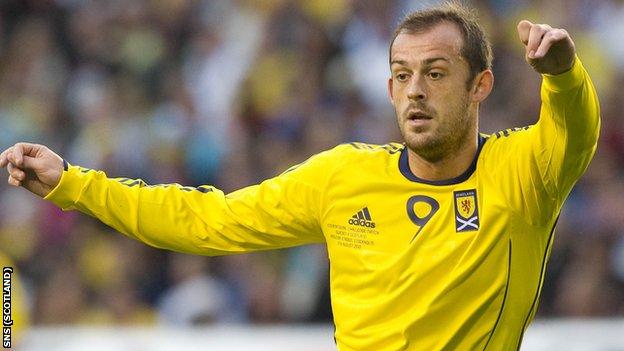 Steven Fletcher will not play again for Scotland while Craig Levein is manager of the national side, the Scottish Football Association has confirmed.

Wolves striker Fletcher, 25, sent a text message to say he was unavailable for a friendly against Northern Ireland in February 2011.

Levein has not picked Fletcher since, although he could return under a future manager because it is not an SFA ban.

"I won't consider Fletcher for any matches," Levein said.

"It's now 15 months since Fletcher sent a text saying: 'Tell him I don't want to play'.

"Those were the words. Until now, the door has been open but 15 months is a long time."

Levein will reveal his squad later this week for the friendly against the United States on 26 May with a World Cup qualifying campaign also looming.

"This is a natural cut-off point," Levein added.

"Going into a new campaign, I don't want the distraction.

"That's it finished now. It's not a ban. I have given the SFA's chief executive Stewart Regan the courtesy of letting him know.

"But this is purely me acting in what I think are the best interests of the national team."

Scotland have failed to qualify for this summer's European Championship in Poland and Ukraine.