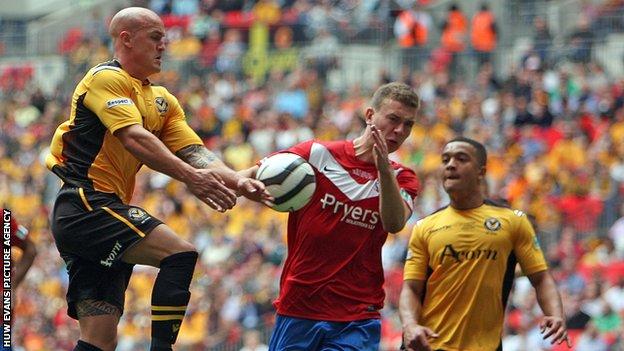 Despite the result Pipe believes the Exiles can take positives from playing at the home of English football.

"If you can't take away this occasion, even though we've lost, and turn it into a positive then you're in the wrong game," he said.

"If you come here and it doesn't enthral you to come again in the cup and also getting in the league then there's something wrong with you."

But former Wales international Pipe said playing at Wembley was an unforgettable experience despite the result.

"I still think it's a beautiful place, but inside we're all hurting," said Pipe.

"It's never nice to lose in any way, never mind a great occasion like this. But fair play to York they won the game on the day, but obviously [we're] disappointed.

"I think everyone went out there and we held our heads high."

As well as reaching the FA Trophy final, Newport managed to escape relegation from the Blue Square Bet Premier this season.

Pipe confirmed he will be staying at Newport, having joined in September 2011.

The former Coventry and Bristol Rovers player was given the chance to resurrect his career after serving time in prison and signed until the end of the current season.

"I'll be signing on the dotted line this week," added Pipe.

"I've shook the gaffer's [Edinburgh] hand and I know he's a man of his word, like myself.

"We've talked finance so all I've got to do is sign on the dotted line and look forward."