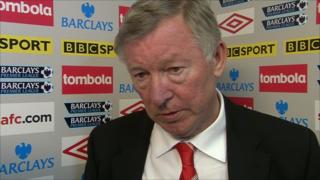 Two injury time goals from City rendered United's win at Sunderland irrelevant, with Ferguson revealing he was unaware of the result "until the Sunderland fans started cheering" at the end of the game.

Ferguson praises his players for "conducting themselves brilliantly" during the season overall, and insists he is ready to lead a United revival next season, warning City supporters he is "not going away".