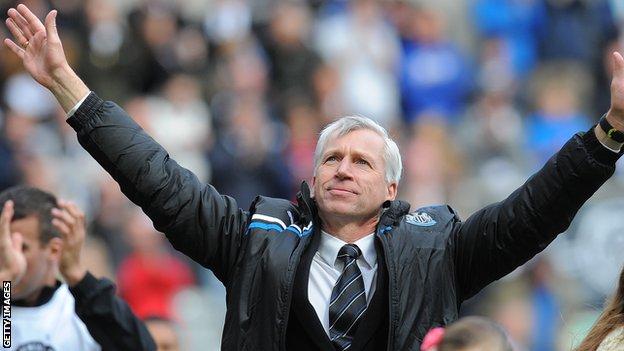 Alan Pardew is backing Newcastle to be even stronger next season after missing out on the Champions League.

Newcastle's hopes of joining Europe's elite next season ended in heartbreak after a 3-1 defeat at Everton.

Pardew's side will instead compete in the Europa League after securing fifth spot in the Premier League table, their highest finish since 2003-04.

"There's something to build on. We'll strengthen and make ourselves stronger," said the Newcastle manager.

Pardew said defensive reinforcements a priority after conceding "too many soft goals".

"It has been a tremendous season," added Pardew despite defeat at Goodison Park.

"We have played every game to try and win.

"Even here, at 2-0 down, we were pushing the game. We are very proud of what we have achieved.

"But it is something to build on. We have got to improve in certain areas.

"We have conceded too many soft goals at the back this season.

"But we have made great inroads to the bigger clubs. That is credit to the players.

"We have got a European campaign on top, so it won't be easy. But it has been a magnificent effort.

"To finish above the likes of Everton, Liverpool and Chelsea, it is a fantastic achievement."

Newcastle had gone into the Everton game requiring a win to have any chance of joining Manchester City and Manchester United in the Champions League.

In addition, they needed both Arsenal and Tottenham - who won their games against West Brom and Fulham respectively - to slip up.

"Both won so that softens the blow a little bit," said Pardew.

"We thoroughly deserve to finish fifth. It's just great to be back in Europe."