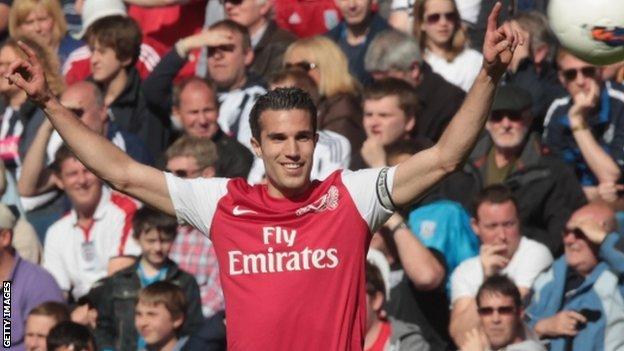 Robin van Persie will discuss his future with Arsene Wenger this week but the Arsenal striker refused to commit himself to the club in the wake of the 3-2 victory over West Brom on Sunday.

The 28-year-old finished Premier League top scorer but his future is in doubt.

Van Persie will meet with his manager and Gunners chief executive Ivan Gazidis this week but was cagey when questioned on his future.

"I love this club. Whatever happens that will never change," he said.

Wenger has spoken of his confidence that Van Persie will stay this summer, despite interest from Manchester City and Juventus among others.

Van Persie, recently named the Professional Footballers' Association and Football Writers' player of the year, is out of contract in the summer of 2013.

I have been playing here for eight years and I love this club. Whatever happens that will never change

Arsenal are expected to offered the Dutchman a four-year contract to remain at the Emirates, a deal that would break the club's current wage structure, to ensure he stays.

The Holland squad begin their preparations for Euro 2012 late next week and Arsenal are keen to open talks having secured Champions League football with victory at The Hawthorns.

"We will have a chat next week somewhere with the boss [Wenger] and Ivan Gazidis," Van Persie said.

When asked if his future will be sorted out quickly one way or another, he said: "You never know but Arsenal is a massive club, a great club.

"I have been playing here for eight years and I love this club. Whatever happens that will never change."

Sources close to the player, who finished the season with 30 Premier League goals, have indicated Van Persie's instinct is to stay for at least one more season, having been encouraged by the signing of Lukas Podolski from Köln for £10.9m.

The Dutchman also said the promise Champions League football next season was important for the club.

"The best thing is that we stay in front of Spurs. They won today but it didn't matter. The main thing was coming third and we did it, so we can be very proud."

Laurent Koscielny, who scored the winner as Arsenal came from 2-1 down to win 3-2, said he was confident Van Persie would still be an Arsenal player next season.

"He will be here next season," the France defender said.

"He was a fantastic captain, he was so important for us. He will be here scoring goals for us next season."

After the game Wenger reflected on a season of ups and downs and admitted his side had come through because of the character they had shown.

"At the top level, the mental aspect is very important," he said.

"The club was in crisis for a while but the way we came back was incredible and the players and the staff deserve huge credit. The character we have shown has been amazing."